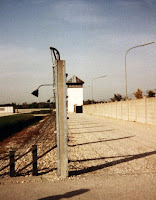 Last week end I went to see the film based on John Boyne’s book “The Boy in the Stripped Pyjamas”. Boyne’s novel is based on the relationship between 2 boys born on the same day one a Jew in a concentration camp and the other the son of the Camp Commandant. The film is intentionally bleak condensing the wider relationship between race into 2 characters and yet they’re only 8 who’ve both held on to their innocence despite the catastrophe surrounding them.

The holocaust is something that I think Irish people should try to understand. I am surprised that of all nationalities it is an Irishman who wrote this book to pass on the story to another generation, given Ireland’s neutrality in the war and the relative low numbers of the Jewish community living here. Boyne has done a valuable job because the reality is that there are few survivors of the concentration camps still alive and as the war generation ages the story of the holocaust needs to be re-told in a format which young people need to understand.

Not just was the holocaust an attempt to wipe a race off the face of the earth, H

itler also wanted to exterminate ideological opposition and anyone who didn’t meet his criteria as a full person. Socialists, Trade Unionists, Christian Democrats, Christians, Gays, Handicapped, Gypsies, Artists & Intellectuals all were rounded up and slaughtered. Dachau opened just 2 months after Hitler was elected in 1933. Its existence could not have been unknown being just 15 miles outside Munich and the camp on the edge of a considerable town.

I visited there almost 25 years ago and couldn’t get my head around how the existence of this death factory cold not have gone undetected. Over the entrance gate is the grim ironic slogan “Work liberates”. Watch towers still stand over the no mans land between barbed wire fence and bounda 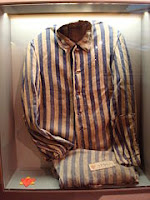 ry wall where landmines once were planted. I also visited Bergen Belsen and was struck by how remote the camp was and how lonely and abandoned an inmate would feel as they looked out over a bleak heath to freedom. Belsen was such a threat to public health that it was burned to the ground due to a potential typhoid infection. There is a small museum there now and burial mounds containing the remains of Hitler’s victims.

Never Again was the proud commitment given by an optimistic post war generation to the world. One wonders after Rwanda, Darfur and Bosnia whether the baton has been picked up by successive generations and where it will be in a generations time?