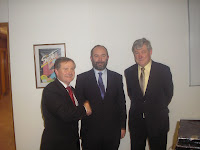 Last Monday night saw the selection convention in Wexford Town of Labour candidates for the 2009 local elections to Wexford County Council and Wexford Borough Council. The convention was held in SIPTU’s new Corish Memorial Hall in Coolcotss Lane. The meeting was presided over by the Party Chairman Brian O’Shea TD from Waterford. There was a very big turn-out despite the closeness to Christmas.
The direction from head office was to select 5 candidates for WBC one of whom was to be a woman and for 3 from Wexford District, again one of whom is to be a woman. In the Borough we hold 5 seats out of 12, and Labour has a pact with the junior party on the council Fine Gael controlling the council since 2004. Tommy Carr has decided to retire after many years of service to the party and town and his replacement is Theresa Walsh. There were fulsome tributes paid to Tommy for his work down through the years. Each was well deserved. 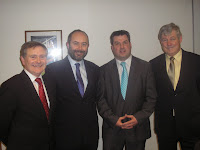 7 candidates including offered themselves to the members. In addition to myself & Theresa being selected, Davy Hynes, Ted Howlin & George Lawlor will also pull on the Labour jersey for next June.In the county, Ted and George will run. Good Luck to all and hopefully next June will see once more another clean sweep. In the pot above is yours truly, Brendan and Brian while George joined us for the picture below.
Posted by Unknown at 3:42 PM