O'Leary's Aer Lingus move flies in the face of competition

You learn something new every day. I always thought Michael O’Leary supported competition. Competition or so the text books suggest is in the interest of consumers. Now however that is not the case. No one can deny that the arrival of Ryanair on the market brought development of the aviation industry out of Ireland. There is a negative side to Ryanair, anti-union, anti-disability, publicity seeking CEO, routes landing at airports remote from cities they claimed to fly to. I’ve never flown Ryanair. I choose not to fly with an airline that broke a strike but I hope that my principles don’t influe

nce my wider view of the aviation industry given that Aer Lingus coined the phrase “enviromentaal push factors” when it was a state company to get rid experienced workers so as to get its wages bill down. Your choice if you want to fly off this island is between a strike breaker and an ageist bully. To complicate the matter one owns 25% of the other!

I don’t believe that this move is in the interest of consumers, Seamus Brennan famously saved Ryanair by awarding them Stansted at the expense of Aer Lingus. This move if it goes through will see a virtual monopoly on one of the ‘worlds busiest corridors between Dublin & London in favour of Ryanair. This plan may be in the interest of Ryanair’s shareholders many of them who live outside the state but its not in the interest of Ireland nor the consumer.

However Michael O’Leary is smart to the wider reality. The reality is that Brian Cowen’s disastrous tenure in Finance has seen tax revenues plummet and that the government needs money. There is a chance that the €175M price tag on the government 25% share would now tempt the government into selling leaving O’Leary owni 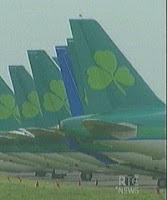 ng over 50% before he buys shares on the open market. The ESOP will then be isolated and marginalised. If that happens I expect that Michael will immediately restore Heathrow flights out of Shannon.

I remember being on South East Radio when FF went for privatisation and I forecast that within a few years Aer Lingus would end up being a shamrock on the tail of an aircraft. It seems that Michael O’Leary the well known taxi-driver from Mullingar was listening and now the wheels have been set in motion!

I hope that Ryanair’s plan is shot down. When Ryaniar outgrew our local regional airport here in the south east they weren’t long upping sticks and leaving the region high and dry because it was in the interest of the shareholders. Nothing that has happened in the 20 years since has changed Ryanair’s priorities. Competition is just a fanciful ploy used by a company to boost sales. They’re only interested in themselves. Replacing a state monopoly with a private monopoly is a waste of time and exposes the neo-liberal economic view for the sham it is.
Posted by Unknown at 8:41 AM

Yes, it is somehow ironic that the man who is such an advocate of free market competition and who broke the Aer Lingus monopoly is now trying to re-establish exactly the monopoly he broke.

I do remember the start of Ryanair in Waterford, but as you point out correctly, as soon as the airline grew, they left Waterford behind and had no more time for us.

I also share your principles and have never used the services of Ryanair. In fact, I have not used any airline for the past 18 years, for environmental reasons.
Besides that I also object to the way passengers are treated these days. As long as they treat them worse than animals, no airline will see a single cent from me. A ferry might take a little longer, but at sea they still treat their passengers in a humane way.

Best wishes from Waterford to Wexford.

Thanks for that comment, to tell the truth I haven't flown since 1994 but air travel is not a plesant experience particularly if like me you have children. My passport is 7 years out of date, if I go to Britain I take the ferry & car. As you say a much better experience, especially for children.
Also Stena at least retain RMT workers.