Last night’s Late Late show was the most depressing I’ve watched in sometime. Don’t get me wrong my only criticism of is of one topic in particular, one I never thought I’d see again and that’s emigration. On a human level I have huge sympathies for the 20 something’s that Pat Kenny interviewed who sat in the front row left with no alternative but to go abroad for work. Having been part of a similar generation 20 years ago faced with the same likelihood, the word emigration brings an empty feeling to my gut. To be fair one or two of the guests may well have gone to Australia anyway for a year out in search of downtime, fair enough I’ve no problem with that either. My interest in the matter is the overt message that there is little work for young people now in Ireland, especially if you’re in construction so go to where the work is. Sadly emigration, even in the limited options now available, is where these young Irish now see their future, and that is surely the biggest failing of all of the mistakes of this government.

In the context of the present world economy there’s few places where there isn’t a recession. Australia seems to be the obvious place for most people. Last July I met a parent of a former pupil and when I enquired as to how he was I was told that he had lost his job in an architect’s office. I sympathised and said I hoped it wouldn’t be a case that he’d have to emigrate as there weren’t too many countries where there may be a need for architects other than Australia. His mother then went on to tell me that if nothing came up he was going out in August which he eventually did. Sad to relate that he’s not the only one going south and that he won’t be the last. 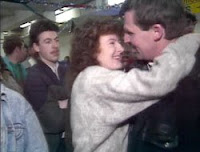 I can remember Gay Byrne telling us day after day 25 years ago that the country was “banjaxed” and that the last one leaving should put out the lights. It’s easy to say but the effect of those words on a generation of young people is damaging. We now know that the country wasn’t banjaxed and that money was stashed away from revenue in a black hole. When unions pointed this out they were told that there was no black hole, no money leaving the country for the Isle of Man, Channel Islands or Cayman. Now we know much better. Just as we have another symptom of the 1980’s back in the form of emigration I wonder has tax evasion returned too? I note that Ryanair are opening new routes to Spain from Knock and I wonder how so many people in the 2 countries appear to have so much money to support such a service when both economies are in difficulty. Property over there is much cheaper as they followed policies similar to our own government.

The reality is that emigrants from Ireland may find it harder to get into the US due to security considerations and the UK and Europe may be no better than here as these economies are in recession also. Some people call it the confidence to spend, others call it reluctance to pay now but whatever the reason no one wants to buy and that’s a huge problem in the economy. But if money came out from under the bed would it not be economically more productive? This is the rainy day that the wealth should have been kept for. I know that the sustainability means you cannot keep building houses but if school buildings were constructed, better insulation installed in houses I, like Eamon Gilmore, believe far fewer people would have to emigrate. Would it not be more productive to our economy to have these young people here than abroad, returning only at Christmas time?

RTE used to run a regular feature at Christmas where Jim Fahy would go to Knock Airport to report on the return of emigrants from Mayo to London after the Christmas break. No stronger image existed of a failed right wing policy. 1 million people emigrated between 1921 and the 1991. Jim is still on the payroll of RTE, what’s the bet he’ll be back in Knock Airport next year? With no change in direction I think it’s a likelihood.
Posted by Unknown at 8:35 PM