Against a background of resignations and rumour the Irish banking industry stumbles on. Anglo Irish, IFSRA and next it’s speculated Bank of Ireland. This week end saw the announced retirement of the CEO of IFSRA Patrick Neary following criticism of his office over communication failures arising from Sean Fitzpatrick’s loans from his own bank Anglo Irish. There is a real need for a more stringent regulatory framework in the financial services sector and before anyone else takes over at IFSRA they have that right to significnatly increased powers.
However with the EGM of Anglo Irish due at the end of this week shareholders will doubtless have an interest in one paper today. Further evidence of links between the bank and the Dublin Docklands Development Authority emerged. Lets recap on previous links, Sean Fitzpatrick former Anglo Irish CEO was a member of the DDDA board when developers who were Anglo Irish customers received planning permissions from the authority. Lar Bradshaw who chaired the DDDA joined the Anglo Irish board but resigned with Fitzpatrick. Now it seems a DDDA board member is married to a top Anglo Irish official who works in the bank’s private finance operation. Of course there's no suggestions of anything other than the highest ethical practise as Anglo Irish's track record stands shoulder to shoulder with other Irish financial institutions as exemplary. However the paper noted that no one was available to speak and phone calls weren't returned. Why is Anglo Irish employing a financial spin firm in London? 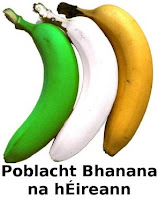 By this time next week the Department of Finance may have persuaded shareholders that it should control 75% of the Anglo Irish shares. Perhaps it’s time to send in an inspector to investigate before the necessary legislation is passed. Any returning immigrant would be confused where Anglo Irish has come from. If Bank of Ireland was ascendancy 19th century money, Allied Irish was Lemass era 1960’s money the bank that once congratulated a customer who became Taoiseach with a salutary letter intoning this great little country, then Anglo Irish is Celtic tiger money.

Building a society is not the same as making a profit in a free market economy. A handful of players have effectively driven the economy into the ground in their endless pursuit of profit. Developers, cheap finance and Fianna Fail created a myth of wealth based on appreciating asset values while elsewhere there was very little happening. When it came to leisure the phalanx of universal master’s sport of choice was horse racing, builders invested in bloodstock and bested one another to own larger stables of thoroughbreds. Cheltenham became the Galway tent on tour. Presumably from their perspective there’s no sport more appropriate for Ireland’s new royalty than the sport of kings. Indeed Anglo Irish sponsored the opening day of the festival the now ironically entitled Supreme Novices Hurdle for 4 year old horses. Ironically some developers are now off loading their horses anxous not to be seen in the social columns at race meetings.

Anglo’s singular pursuit of commercial investment has exposed it to ruination. As a consequence 4 year olds in this country will now have increased class sizes to pay for the party. Amazingly Cheltenham 2009 again sees Anglo Irish Bank sponsor this Cheltenham race despite their finacial colapse. How much does this cost and why should shareholders wear it any further? What does the new putative shareholder Brian Lenihan think of the horse fest sponsored by a zombie bank for insolvent Irish developers and party supporters in the Cotswolds for which the Irish taxpayer may well foot the bill? Surely spending hard earned euros in Her Majesties domain contradicts Lenihan’s warning about patriotic duty?

Finally I’ve checked the field 2 months out from Cheltenham for the Anglo Irish Bank Supreme Novices Hurdle and it may prove embarrassing to Anglo Irish and the Minister that at this stage good prices are available for Honest John, Does Less Than Me, Endless Intrigue, and you’d better believe this it’s true, Conflict of Interest! No better epithet for the Celtic Tiger era. At least on this gamble my hands will stay firmly in my pockets!
Posted by Unknown at 9:07 PM