End of an era

In the end it finished up as an anti-climax as Mayor Ted Howlin rang the final bell to draw to a close our last meeting at Wexford’s Municipal Buildings. After 6 decades in the old Tait Schoolhouse it was time to move on. It was totally inadequate for staff, in particular the outdoor staff who had a bleak yard which always fed a draught into their office. They’ve moved up to Whitemill while the staff have been in Crescent Quay for about 6 months. The monthly meetings were still held in the building while the Court Service prepared to take it over. Now it’s all theirs, the history, the majestic view over the harbour to Curracloe form the first floor but most of all the fine 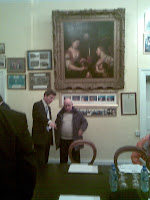 chandeliers that hangs in the chamber. Enjoy it your honour!

The final meeting passed the final stages of the 2008-2014 Wexford Development Plan. When the initial draft was presented back in July there was nervous optimism about the objectives. If we knew then what we know now then I’m sure the plan would have been less expansionary. But I’m certain that every council in the country was similarly caught by the collapse in the economy. Having a development plan is a legally binding obligation on every local authority. The previous plan has achieved many of its objectives, what we had was rapidly becoming redundant. The officials are supposed to be planners, engineers, architects not fortune tellers. I joked to one official that there won’t be too much to do in 2014 only re-bind the new plan in another jacket marked 2014-2020 as little expansionary economic activity may occur in the next 5 years, government investment will be at a minimum and house building has effectively ceased as there’s plenty of empty houses to be sold. 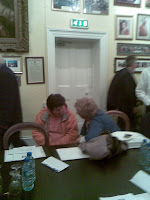 Anyhow as we were finishing up it struck me that a little bit of political history was being made. Former Mayor of Wexford Cllr Tommy Carr who sits beside me in the chamber was sitting at his seat for the last time as he retires from public life in June. His picture hangs in the chamber. He posed for a picture at his seat. Enjoy the retirement. Other councillors in the frame include Davy Hynes, Phil Roche and Anna Fenlon.
Posted by Unknown at 9:54 PM