Cromwellsfort dumping is the pits 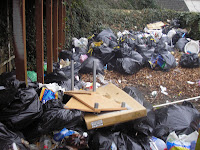 About 2 weeks ago I was contacted in relation to domestic waste that had built up at Cromwellsfort House. As you can see from the pictures its not a pretty site. Even more unattractive is the story behind the rubbish and as to how this can happen. I’ve contacted the local authority with regard to the matter and those responsible for the mess, are being pursed legally by the local authority. If you want a case study of light touch regulation in the property sector by Fianna Fail and the Greens then here it is.
The property is owned by Wm Neville & Sons Ltd, a Wexford company that has in the past, featured in The Sunday Tribune Top 100 Ireland rich list. The house is retained as an apartment block. It is the day to day responsibility of a management company. Neither the property nor grounds are in the care of the local authority. The property owner Wm Neville & Sons Ltd has not employed a caretaker to maintain the property and has not secured the property against fly tipping. The company has effectively invited fly tipping onto its property by this neglect. 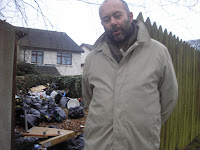 There is no statutory authority to act independently in the interest of residents. The management company has a contract with the property owner to provide agreed services. What happens when the responsibility of the owner extends beyond that contract? Call in the tax payer in the form of the local authority.
Surely where the state has to step in, the owner should pay. And pay beyond the full
commercial price so that the charge acts as a deterrent against a repetition rather than an itemised bill as to what was done as part of the cleaning up. If the potential offender knew he’d be hammered then this would act as a deterrent against the type of environmental vandalism you see n the pictures below. 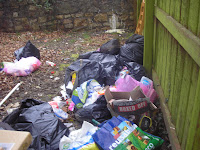 The law relating to fly tipping gives the owner 7 days to act so as to clean up. If work is not carried out by next week, the matter will be pursued further. In reality the government needs to bring in new legislation on management companies. What happens if the management company goes bankrupt or apartments are left empty and insufficient money is there to maintain the entire building? Although given the charge of some management companies I wonder how they could run out of money. There is no legislation at present to address these situations and I don’t think its on its way as the government keeps prevaricating on the matter. Whatever legislation may be promised it’s all too late for the residents of Cromwellsfort House. If John Gormley saw what these apartment residents look out on every morning I wonder would the matter have been already resolved?
Posted by Unknown at 10:49 PM