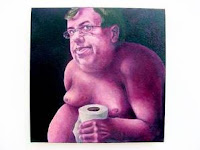 So there’s 5 junior ministers to go. How many do you know? How many will you miss? Who’s safe and who’s a dead Minister walking? Next how much severance will be paid to retiring ministers and their entourage? The ministers have been told that they have to go by April 21st. I think that there might be a re-shuffle and that some responsibilities may be merged and others replaced. It was a cute move by some ministers who perform in the media to offer their jobs last January when this was first mooted. Most of them had a real job. Notice who didn’t? Well I reckon Cowen did! Could it be possible that it might be the case that more than 5 could go and that a new face might be introduced?
So lets try to predict what may happen. As with the US presidential election when I forecast who’d win where, I’ll put my cards on the table and say who I think is going and who’s staying. First who’s staying; Manseragh, Roche, Moloney, Carey, Haughey, Andrews, McGuinness, Lenihan, Devins, Kelleher, Finneran, Peter Power & John Curran

1. Maire Hoctor should be a likely casualty as a result of her appalling performance to OAP’s in November. Anyone who saw her inept performance on the Haulbowline toxic dump when she clearly couldn’t handle her brief. To add to her problems the junior minister at Health has presided over the downgrading of her local hospital in Nenagh.

2. Trevor Sargent The Greens won’t be ring fenced against loss so he’s a likely target. Do we really need a Minister for State for Farmers Markets? The Department of Agriculture already has another junior, Tony Killeen who’s duties include forestry and fisheries. Could the actual minister not take responsibility for farmers? Sargent has been anonymous since taking office and is a disappointment.

3. Wednesday Wallace. Mary famously got the hump after a previous demotion so she only turned up on Wednesday to vote thence the nickname. Mary represents East Meath but lives closer to the Dail than many Dublin deputies. Consequently the amusement at her detachment from the political process. There are 3 Junior Minister at Health, Maire Hoctor being another. Over manning at the HSE is policed by 3 juniors and one senior. Looks like Mary will have plenty of time on her hands soon.

4. Michael Kitt. A brother of Tom who fell out with Cowen and announced he wouldn’t run again. He’s junior at Environment with special responsibility for local services. As a councillor I haven’t a clue what services he is responsible for. I’ve never seen a document he’s signed Given that Michael Finneran does housing and urban renewal what extra does Michael bring to the table? Time for the minister to pack his kit bag. 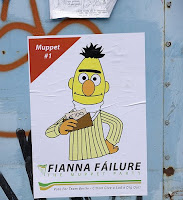 5. Noel Ahern. Carey is Cowen’s man in North West Dublin. Noel isn’t. Can 2 ministers be showered on a small 3 seater? Noel has responsibility for road safety, can this not be combined elsewhere in the department? As his brother might have said this wouldn’t have happened if I was still there but the best time to wield the knife is when its not expected.
6. Sean Power. A Kildare deputy who as we all know, is responsible for the information society. This little bit of information may be surplus to requirements in the overall scheme of things. So Sean may be another for the high jump at The Curragh. 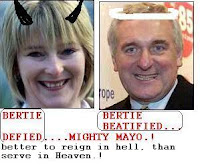 So that’s 6 gone, with only 5 Ministers to go! So who is going to be promoted? Well to counter any suggestion of inequality as both women are gone Beverly Flynn will be promoted. This’ll counter any suggestions of crony capitalism and give the government a good inside knowledge of how banks do their business. With George Lee heading towards Fine Gael according to the rumours and Charlie Bird in Washington there’ll be no one to ask hard questions in the media about financial probity.
So when the rating agency sees the new faces in government as they called for last week we can draw the obvious conclusion that the deposed ministers were the fall guys or girls and ironically the one to benefit from corrupt banking could be Beverly Flynn. It could only happen in Ireland!
Posted by Unknown at 4:54 PM

Thanks for highlighting who they are Joe! I didn't know as they don't exactly light up the news headlines with their innovation now do they?! I think they should all go and let the civil service do their job without political interference from ministers courting the public - minister for farmer's markets indeed. I remember when Ivor Callely was a junior minister in the dept. of health and didn't seem to be overly interested or knowledgeable in his brief - he was probably more interested in painting his holiday home or getting the garage turned into a 3-bed semi!

All FF staff need firing, new government is needed. Give someone else ago is what I say, if they mess up then they get the boot.
We may even need to look for an external leader with a proven track record, consitutional change, so what make it happen if it needs to happen.
http://fiannafailure.blogspot.com/