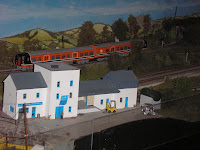 Wexford’s best known train driver Donal Fallon has been a busy man for the last few months. He single handed organised a model exhibition over the Easter week-end in St Josephs Club in aid of the Autism unit at Scoill Mhure, Coolcotts and the RNLI. The inaugural exhibition had exhibitors from Wexford, Dublin, Cork, Laois as well as trade stands form Belfast and Dublin. The models include planes, boats and pf course trains. Donal spent most of Holy Saturday setting up the exhibition. That meant putting in crash barriers, displays as well as awaiting the arrival of HK075. HK075 is a non de guerre of a well known rail gricer Dave. Dave is a railway man to the core. The first time I met him he showed me his RMT badge within minutes of talking. Next he told me that his dad was from Arthurstown. Technically Dave is from Wolverhampton but forget the accent he’s on home turf as his dad is a yellow belly!

The exhibition was opened by Mayor Ted Howlin who congratulated Donal on his initiative on launching the exhibition. Donal was however delighted that the wet weather drove plenty of punters indoors and into support the exhibition. I went along and I was really impressed by the attention to detail in the modelling. 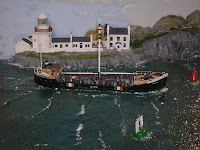 One model stands out as impressive and it has a local significance. It shows Wexford’s famous Kerlogue arriving in Cork Harbour laden down with a human cargo of WW2 German navy survivors from a sinking. The Kerlogue was launched in Holland in 1939. The rescue was one of the most dramatic during World War 2 when a Wexford vessel the Kerlogue was diverted in December 1943 following a request by a German aircraft to the scene of a sunken German vessel whose crew had abandoned ship and were in the waters of Biscay. The Wexford vessel took on board over 168 sailors in rough seas over a 10 hour period and ignored RAF instructions to make for the UK but continued to land at Cork Harbour. The survivors were landed in Ireland and spent the remainder of the war interned but alive. The last surviving crew man Tom O’Neill of the Kerlogue died a few years ago but at his funeral was one of the men he helped rescue. The crew were interned in the Curragh until the end of the war. While the story of the German rescue is well known, what is less often acknowledged is that rescuing at sea was part of the maritime DNA of the Kerlogue as the ship had rescued British seamen previously. 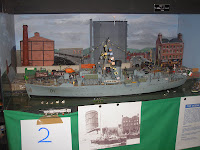 Inset is a model of the original navel corvette the Macha which served as the first Irish naval vessel. The Macha is almost a constituent of mone as it snagged a tow rope on the way to a breakers yard and sank off Tuskar Rock about 50 years ago!

Other exhibits that stood out were Gerry Byrne’s display that he’s building at home. Wexford Modelling Club moved their display from Rathaspeck to St Josephs for the week-end. Usually I visit the club at Halloween when they have their open days. Their display goes from strength to strength. I’m not surprised how popular they are each year. Some photos are attached her but check out Youtube channel Menapia1 for video footage of rail models in action. Well done Donal, I hope we’re all back again next year!
Posted by Unknown at 12:58 AM

Model train sets are so much fun, and there are endless possibilities in the scenery around the train track. Far too much fun to be left just for little boys to play with!

I recently came accross your blog and have been reading along. I thought I would leave my first comment. I dont know what to say except that I have enjoyed reading. Nice blog. I will keep visiting this blog very often.