Brian falls at the first test! 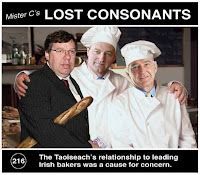 Last week Eddie Hobbs advised to pay off your debts before interest rates start to climb again. Many have been lulled into a sense of expecting prices to drop as petrol, mortgages and food starts to drop as northern prices are rolled out here by multiples. But did he know something? Like many others I got a shock when I learned that interest rates at Permanent TSB were set to go up. My mortgage is with Permanent TSB and recently I lost the benefit of Mortgage Interest Relief. While the effect of increased taxation and the infamous pensions levy mean for all of that despised category called public servants that your income is well done. This is grist to those who want to take advantage of the economic slump to reshape Ireland. Lower income, more charges on the individual, less public service will drive a new private sector that will provide the platform for the next boom, is more or less the credo of the Irish business class.
An even bigger shock arrived later in the day when I heard that ESB hope their domestic customers will soon subsidise their industrial customers through higher charges for power. Not that too many on the minimum wage can afford a mortgage with Permanent TSB but the next move by IBEC/FF was the announcement that legislation would soon be here to bypass the minimum wage and drive pay down in some sectors.
It seems that rather than take on the banks who benefited from the greatest bluff of Irish economic history through the bank guarantee scheme once more corporate Ireland will make either unskilled or young workers pay for the prolifigacy of bankers, developers and Fianna Fail. The real way to re-model the economy is by re-orientating our base back in the direction of production and exporting. But that would mean that the quick buck merchants of the last decade would lose their grip on Ireland and that’s a step too far.
So the long and short of is that the other banks will now follow Permanent TSB in raising their variable rate to borrowers. In a rare interview the Permanent TSB CEO was quick to remind us that his bank was paying for the privilege of the bank guarantee to the value of €30M. So follow his logic and he seemed to suggest that he’d a legal entitlement to the states good name and himself and his board would be off to the Four Courts to put the state in its place. There was however no need for that as Minister Lenihan knows where that place is and so do I, I’ve blogged about it for almost a year now! The government’s bluff has been called. There will be no nationalisation. Instead private debt is set to climb in Ireland. The ECB interest rate and policy is being ignored for Irish consumers, 10 years ago it was quite different as our rates had to converge with Europe’s to allow Irish banks a bit of the property bubble, now interest rates must climb to shore them up. So its time to knuckle down and pay up for the roof over my head!
Posted by Unknown at 5:18 PM