Set against a back drop of record unemployment, a hole in the public finances, corruption in banking and an uncertain future what do you think the country needs most? Yes you’ve guessed it a blasphemy act! And the act has arrived courtesy of a government guillotine in the Dail right on time for another wave of claims of supernatural religious phenomena.
25 years ago we also lived through a previous wave of social uncertainty and claims of Marian apparitions. Interesting the initial sighting of moving statues all those years ago was not too far from the town of Rathkeale at Asdee. The wheels were coming off Ireland in the mid eighties. The death of Anne Lovett, the Kerry Babies Tribunal, church state conflicts over abortion, contraception and divorce acted as the back drop to the last Marian sightings in Ireland. Most sightings were rural and south of the border despite an obvious need for divine intervention in the mind of northern Catholics who were engaged in a bloody tribal war.
In Rathkeale locals felling a tree in a church-yard with a chain saw claim that the shape of the vascular bundle tissue of the heart wood of the felled tree is the outline of the Mother of God holding an infant. They also claim that this coincidence has a supernatural meaning and are holding candle light prayer vigils late into the night.
I don’t believe that there is anything supernatural about the coincidence but I’ll admit to being a sceptic about all apparitions. It’s easy to file this story as the silly season. Ballinspittle for the new millennium. Limerick is traditionally regarded as the most conservative county in Ireland. Rathkeale is about 15 miles from the city. 100 years ago the city’s Jewish population were run out of town after a pulpit inspired pogrom. I remember Jim Kemmy being witch hunted out of office because he supported abortion. Frank McCourt chronicles the hard lives led by the working class in his work and the religious repression. The city is at present the site of a turf war between some of the most vicious drugs gangs in the country. Rathkeale is unique in the country having the highest percentage of settled travellers. Travellers have a strong tradition of religious devotion. Famously it is said of the town that of all the places visited by Daniel O’Connell it was only Rathkeale where he found it impossible to get a woman! 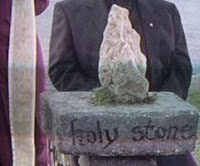 I go to church most Sunday’s. I believe in respecting another’s right to hold a view no matter how incredible it may seem. This doesn’t make it true nor does it put you beyond ridicule when you claim that discolouration of a tree’s heartwood probably caused by a bacterial or fungal infection has a religious significance. The phenomena of these sightings was hilariously sent up by Dermot Morgan in Fr Ted who filmed about 40 miles away from Rathkeale. I’ll put my hand up to being a practising A la Carte Catholic. It’s got to be the scientist in me. If you cannot record or monitor and get measurable evidence then you cannot substantiate claims. Second hand evidence or something you cannot check don’t count in my book. So in short it’s a case of move along there’s nothing to see but lots to explain. I hope I’ve tried! I'll reurn to the Blasphemy Act another time, that's if I haven't been rounded up based on the above seditious thoughts!
Posted by Unknown at 12:52 PM