Heuston, we’ve got a problem 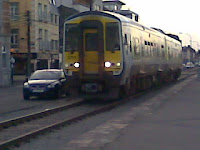 When I started this blog last year the first issue I raised was the lack of public transport in Wexford. I focused on rail because the county still retains a lot of its rail infrastructure unlike many other counties and its something I want to see developed in terms of passenger and freight.
So the forthcoming rail timetable is a document I pour over as closely as a programme for government. I want to see how my town is affected for good or for bad. A timetable reveals what management believe is important. Publishing a timetable outs the management to the travelling public. The forthcoming timetable sees increased trains to Wexford from Dublin. I welcome that and it’s good to see that. Wexford is becoming a destination which allows a speedy turn around and return. Trains only take in revenue when they run, so keep the train moving is my motto. Which is why I’ve always pressurised management to run trains to Waterford. When I came to Wexford in the mid 90’s there were 3 return trains between Rosslare and Waterford, now we’re done to one train. The south Wexford line was particularly busy with sugar beet, now it’s a quiet back water since the demise of that industry.
The absence of freight presents huge opportunities to Irish Rail. To be fair to them they introduced a connection between the town and Waterford in response to my lobbying. I've travelled on the train myself one morning last year. Imagine my surprise when the train stopped in the middle of nowhere, the driver got out, crossed the road, opened the gates, drove the train across the road and the dismounted oncemore to shut the gate before resuming the journey to Waterford. But next month will see the retreat from Wexford as the service is scalled back. 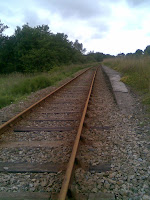 The new timetables for implementation in September shows that while Irish Rail will provide a commuter service to Wexford to Waterford there will be no return service in the evening. While trains will leave Rosslare Europort as the connecting ferry service is docking at the pier making it impossible for passenger to connect as the rail company re-located the rail station about 600 M from the ferry terminal. The new timetable as a total mess. 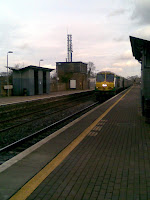 The new timetable fails not just to integrate trains with ferries but even trains with trains. It’s incredible, a child could do better. Irish Rail has failed to promote in the local media the Wexford Waterford commuter link even though the return fare is cheaper than Bus Eireann. Next year rail services to the west will be extended but the chance to integrate to Wexford has been lost. Students who wish to commute to Waterford IT will find themselves marooned at Rosslare Strand on the return journey having missed the last connection to Wexford by 20 minutes. As a timetable it’s unworkable and will result in fewer passengers taking the train. When I heard about the potential cutbacks to train service I wrote to the 2 Green Ministers and the Transport Minister Noel Dempsey. The best response I got was that it had been referred the matter to Irish Rail who replied from Hueston Station to advise that the CEO was on holidays!

I’m also astounded that Irish Rail spent over €30K in 2008 taxiing train crews from Rosslare Europort to Waterford rather than running an evening service back to the city from Rosslare Europort. Given the low customer base in South Wexford, incurring such a high overhead on staff transport insured from the outset that the Rosslare Waterford rail service could never be viable, cutting the service in half insults the travelling public. This is a service that was set up to fail. Coupled with the severing of the New Ross line from the network, I wonder what is the commitment to the future of rail services out of Waterford? When will Irish Rail learn that we all don’t want to go to Dublin?
Posted by Unknown at 6:47 PM

-
Hi Joe: Can you tell what is the duration of a train journey from Dublin to Wexford nowadays?

...what does that work out as the kph / mph of the locomotive ?

Completely off topic, but I am just trying to raise awareness of the issue of the extradition process against Sean Garland.

There is an article on the subject here.
Prehaps you would consider signing the petition.

The time taken for the journey is about 2 hours 45 minutes give or take. The train stops at each station and waits at some to pass the other train. Journey is longer than 130 Km becasue the line travels inland and in Wicklow travels around the mountains. journey tomes ot Dublin could be better and I've pointed out to IE at council meeting that it should travle non stop from Bray and should depart Pearse. If the service frequency was increased it would allow the train faster services going express past some stations but also re-opening stations like Ferns or Avoca. Why not allow some trains connect at Greystones with the DART and return to Wexford?
On Sean Garland I thought the US had given up as Bush is out of office, Am I wrong?

There is an article today on Garibaldy Blog a Worker's Party blog based, I think in Northern Ireland.

The following is a quote from it,

"We must remember that one of Condeleeza Rice’s last acts in the dying days of the Bush regime was to sign the extradition request against Seán Garland, knowing full well that it would raise tensions on the Korean peninsula, and make efforts at a peaceful settlement by the Koreans and the Obama regime more difficult. We must not be fooled by their lies."

I was as surprised as you are to learn that this is still a live issue. There is a campaign to get politicians from across the political spectrum to support Mr. Garland.

So far a fair number of TDs, senators, MEPs and local representatives from all parties have signed the petition, they seem to be based mainly in Dublin and other large urban areas, I would guess where the Worker's Party is active.

Link to the on-line petition, www.seangarland.org