Ireland Inc on the think about The Pope’s Children 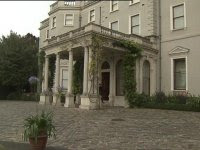 David McWilliams has a knack of hitting on an idea. I find him interesting, he has the strong ability to dissect what he believes is happening and communicate that analysis clearly in the media. TK Whitaker must scratch his head in amazement. Since his arrival about 10 years ago on the scene he’s predicted the property boom and slump years ago on the Late Late Show. He’s analysed the societal changes since the boom and explains how Ireland has become more sectoral than ever before and how these sectors effectively exhibit a herd mentality in their lifestyles, expectations and behaviour. Understanding the zeitgeist helped make Fianna Fail what it is now. FF fine tuned its appeal at election time to Breakfast Roll Man.

Once more Fianna Fail have embraced McWilliams by drawing on the suggestion he made last year in his series “The Generation Game”. Let me declare an interest, a close friend of mine was featured in the series. McWilliams was interested in the aspect of the returned emigrant and the value added by the experience of working abroad to the Irish economy. He spent an afternoon filming the family as they went about their day. His series proposed that the government should utilise the Irish worldwide diaspora for the benefit of the Irish economy. McWilliams suggested that Ireland’s economic future could be secured by embracing its diaspora of second generation Irish abroad as Israel or India do and use our country as link between their dynamism and the market place as a means of providing future trade and jobs.

The Irish diaspora is staggering in size. In addition to more than 34 million Irish-Americans, not including five million who claim to be Scots Irish, there are also 3.8 million Irish-Canadians, 1.9 million Irish-Australians and 500,000 Argentinians of Irish heritage. Add to that 800,000 Irish-born people living overseas, the 3.1 million Irish citizens living outside the country and the 72,000 Irish passports issued in 2007 alone and the sheer scale of this diaspora is both impressive and daunting.

The forum has been described as an Irish Davos. 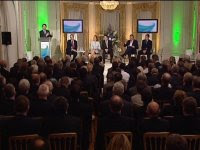 Certainly some of those attending had interesting things to say but only a small number of the contributions were actually reported so I’m not so sure how much will eventually be implemented. I note however that the retired CEO of Intel stuck it into the government in relation to spending on education and how it has not kept pace with other countries. Fair play to him, the reality is that without research and development spend in Ireland, the much heralded knowledge economy is a dead duck. One of the things that the Fitzgerald government continued to do in the bleak 80’s was spend on education. More than that ESF grants kept many of us in 3rd level and this reality still benefits the economy as the intellectual capital is still available in the country.

McWilliams makes further suggestions about the re-introduction of the punt and reneging on foreign debt. As to how you’d bring back the punt I don’t know. One thing that’s kept us afloat in the last 12 months was the euro. Reneging on foreign debt would devastate public services as further loans would disappear. The diaspora might help us out in the medium term but in the short term reneging on debt would discourage anyone from investing in the economy no matter how strong their blood is. A final thought, how remarkable it was to see so few women at the confernce. A great shame that so few Irish wommen have made it to the top abroad. It seems that not just have Irish women a recession to deal with but that there's also a glass ceiling.
Posted by Unknown at 1:03 AM