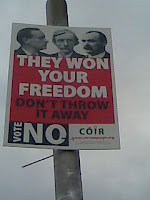 About 2 week ago I blogged that I thought Lisbon was slipping away and that defeat was likely and that a general election would follow as indeed would a leadership contest in Fianna Fail. Given the recovery in public support for the Treaty that scenario now looks less likely although the Yes camp aren’t out of the woods yet. So where has it all changed? Well a number of things have happened. Firstly the left opposition to the treaty have once again been outflanked by the far right.

Coir’s attention grabbing posters claiming that the minimum wage will drop to €1.84, along with the arrival in Ireland of the libertarian UKIP has gone down like a lead balloon. The constantly grating clever dick accent of Nigel Farage has not connected with, to quote Joe Higgins, “the ordinary working class man and woman”. The reality is that Farage cares very little about Ireland and what it does rather he’s more interested in raising his profile in Britain as he’s coincidently announced he’s to break the traditional moratorium on challenging the House of Common’s speaker because he, Bercow, is on the left of the Tory Party.

Now another home counties accent has re-joined the fray, the sinister Cockney tribesman Declan Ganley. Ganley is a man with his past in a closet. Famously he retired from politics after being heavily defeated in the European elections. Ganley queried the count and when he was granted a re-count after he claimed a wheelie bin full of his votes disappeared,

the result saw his actual vote drop as Labour votes were found in his pile. Ganley claims to have been an adviser to a Baltic state where Ministers subsequently claimed they’d never heard of him! His company Rivada boasts on its board retired US generals. Rivada has extensive contracts with the US Military for communications systems. His party Libertas is a private company. In the European Elections he won just 1 of the 100 seats they’d targeted. He’s not the only US military contractor to oppose Lisbon, but he’s the most vocal. Youtube footage shows him hiding a US flag before an interview with a German channel. I suppose it’s a case of an old Tory hiding Old Glory! 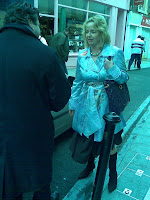 Labour MEP Nessa Childers was canvassing with us since I last blogged on the issue. The response to the canvas is very positive in Wexford. Wexford voted no in June 2008 by a margin of about 7%. If the canvas is suggesting now more voters in a constituency like Wexford and if this swing is being reflected nationally then I believe that the treaty can now pass. Wexford is a typical bell weather constituency in this referendum. If there is a swing to Yes in Wexford and it is replicated all over the country then I believe that Lisbon will pass. However if Marx could declare that it was too early to pronounce on the French Revolution 70 years after the event, then I’m more than entitled to warn against what could happen between now and polling day.
Coir hijacked the internationalist James Connolly to suggest he'd have backed their narrow reactionary campaign. Coir are anti-woman and it shows an ignorance of history to suggest that Connolly was such.
The Yes campaign has sharpened its focus, the red herrings on QMV, self amending treaty, neutrality, abortion, conscription, workers rights etc that surfaced the last time have been nailed. The real fear is that public opposition to the government’s NAMA proposal will galvanise some voters to vote against their better interests as they’ve had enough of the shambles. That’s understandable but voters had that chance last June. There are some things more important than Cowen and Co and this one of them!
Posted by Unknown at 11:50 PM

Well whether it's a Yes or a No result, I think Labor will lose credibility (already have with me). As I have commented before, this treaty is bad for worker's rights. I wish I knew why Labor is supporting it, can only presume that Labor is no longer a left wing party.

Rory, You'e entitled to your opinion on the treaty being bad for worker's rights. It's not one hsared by David Begg someone who in a previous life knows a lot about rights nor is it shared by many unions. To be fair I understand some unions in Ireland (notably UNITE are calling for a NO, while their British parent supports Yes) Is someone seriously saying that these unions do not understand the needs of their members or what's in the interst of their members in relation to rights?
For the last 30 years I've listened to many people say Labour is no longer a left wing party. Some of those critics have now moved on to Fine Gael! In 30 years time I still hope to hear the same suggestion.
What is left wing about lining up alongside Coir, UKIP, profiteers fromthe Iraq War and reactionaries who'd roll back many of the gains that Labour delivered?
I know you're going to throw the IBEC quip at me but before you do bear in mind that the EU worked best in the 70's and 80's when the Christian Democrats and Socialaist mutually understood their positions and worked around one another.
In the absence of Lisbon, we're left with Nice and Maastricht, a Right wing libertarian charter if ever there was one that gave no regard for the social dimension of the EU. Lisbon at least addresses that.
What is the alternative to right and left compromising in Europe, what possible agreement is there between Coir, Ganley and those on the left who support the treaty? The libertarians would vandalise any social role Europe plays and return to the EEC. Is that what you want becasue with Ganley that's what you get.

I've done my best to read the Extended Guide to the Lisbon Treaty. While I see some benefits in terms of re-structuring for a bigger union, the bigger union seems to be all about facilitating big business.
After the year we've had, and especially with the week we're having (NAMA), I am sick to death of big business.
It seems to me that while the government bent over backwards to get reassurances for the right wing NO voters after the last referendum they ignored the more realistic concerns of the left wing.
This is typical of the blind arrogance of Fianna Fail who have simply been too long in power.
I am glad I voted No last time, it was an uninformed, gut reaction vote then.
I see no reason to change, I really believe we can renegotiate this treaty for the benefit of worker's across the whole EU and I believe in the long run the goodwill this would generate for Ireland would outweigh whatever kudos Cowen and company would get for a Yes vote.