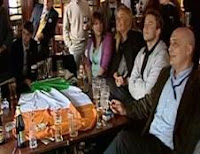 Soon you can look forward to getting a letter from something called UKIP asking you to vote No to Lisbon. Someone who wants you to vote No is one of their MEP’s William Legge, Earl of Dartmouth, MEP.
William wants to restrict the right of EU citizens to go and work in Britain. Since independence over 1 million Irish have found a better life in the UK than this republic could offer. Willie doesn’t have to worry about moving abroad to eke out a living as he’s the 10th person to hold the title and he owns a pile somewhere in Yorkshire and even if that goes belly up he’s connected to Barbara Cartland and the Late Princess Diana so there’s a few bob there to tide himself over the downturn just as there was for his 9 predecessors to the title since 1710.
Necessity is the mother of invention and who’d have imagined that a relative of the Princess Diana who had more blue blood than her ex husband, would now be standing shoulder to shoulder with Sinn Fein in opposing the Lisbon Treaty? What would Lord Mountbatten or the Republican icon Bobby Sands make of that? More to the point what would Sinn Fein voters make of it too? As far as I can make out SF still opposes the introduction of the Euro and prefers the pound sterling despite the sneering at the protestant community in the north that they were more loyal to the half crown than the crown? How far can you wrap yourself up in nonsense and who in the end, do you please? If Europe’s Far Right Lite see Lisbon off talking blarney with an English brogue where does that leave Sinn Fein or the Socialist Party?

2 contrasting policies in 2 different jurisdictions see SF arguing for an All-Ireland economy yet opposing moves to a single currency. What perplexes me is why will the Republican Movement stand shoulder to shoulder beside some of the most unsavoury element of European politics just to oppose continental bureaucrats? The logic of the community is that Britain should join the Euro and be at the centre.
Nigel Farage isn’t the person to lead them there. Former public schoolboy Nigel was a money man, not of course that we need another money man to tell us how our economy should be run. Nigel is a keen supporter of the Better Of Out (BOO) campaign an anti EU grouping of British MP’s that includes Lord Tebbit, Ian Paisley, Author and former Wicklow resident Frederick Forsyth and a number of right wing Northern Unionist and Tory MP’s. Some of these people like Christopher Chope oppose the minimum wage while claiming expenses from the British taxpayers to cover furniture vital to the UK economy like their sofa, or Bob Spink UKIP and former Tory MP who wrote in 2001; “What bit of sending them back do you not understand, Mr Blair?” or Ann Winterton MP who lost her front bench post for cracking racist jokes! These are the intellectual powerhouses lining up on the No side, our problem in this country is that they’ve gained a credence they don’t deserve because those leading the Yes campaign are so discredited.

Later this week Nigel will be in Dublin to debate Lisbon with David Begg. He’ll sit alongside Mary Lou McDonald. Nigel boasts he’s not anti-Irish but pro-British. What interests me about the UKIP intervention is who is paying for the mailshot? Have they registered with SIPO and who’s paying for their campaign? We’ve had Coir YD getting dollars in the past, Libertas with their own funny money and now the party that thinks all Ireland is part of the UK according to their Banner is spending more than a few half crowns getting its snout in. Shades of Yeats’ greasy till about this lot. Failte go h-Eireann agus Slán abhaile.
Posted by Unknown at 11:00 AM

You make a big deal about the fact the there are those opposed to Lisbon coming from a left and right perspective.
Yet the same could be said about the yes side. On the one hand we have Labour and some (not all) leading trade unionists supporting Lisbon as a protector of workers rights and on the other hand we have Michael O'Leary, Pat Cox, IBEC, FF, FG calling for a yes saying that it's good for big business.

Michael O'Leary refused to say on "The Last Word" whether he voted Yes or not last year so you can presume he didn't. Could you visulise Cox, IBEC and Co lining up with Coir? Do you seriously beleive that the status quo i.e Nice or Maastricht is not in the interest of business? In that case I was wrong in voting No to both!
The Charter of Fundamentla Rights is a huge advance for working people. I cannot understand left wing parties opposing it.
Irish nationalists in SF ahve every right to line up with UKIP an avowed Pro-British party that is opposed to immigration from Europe, but don't waste my time with this SF left wing stuff. I hope yhe impact of a Britsh accent lecturing Irish people affects the result.

Again I refer back to the last point on page 3 of the Extended Guide to the Lisbon Treaty published by the referendum commission, "The European Council has also issued a solemn declaration on social issues including worker's rights. This is a political statement and is not legally binding."

It's all very well to keep bringing up Coir, SF and now the UKIP, but look at Labor's bedfellows on the Yes side.

Mr. William Legge
The intervention of UKIP in the Irish Lisbon 2 treaty election is an act of unbelievable aragroance from an obscure and questionable English MEP called William Legge Earl of Dartmouth, and maybe has just lost the election! For the no camp
This gent is no friend of Ireland, as Will wants to restrict the right of EU citizens to go and work in Britain. So you don’t have to be a Genius to conclude that if he had his way he would like to move all the Irish back to Ireland from the UK
The No Camp has being dealt a bitter blow by this unwanted intervention and has even raised new questions regarding the bigger picture for Europe
However unpopular the current government is they are after all “Irish Politicians” and are voted in to office by the Irish people and can be voted out again
British politicians however, never have had the welfare of the Irish people’s interest at hart and this alone, makes me wonder, and prompts me to rethink my No stance!
Love of Ireland will always come first
Thomas Clarke
More at www.machholz.wordpress.com

I think it is unbelievable arrogance on the part of UKIP to mailshot all households in Ireland with their Neo-Colonial twisted arguments - I didn't read about this legge bloke, just about Farage, who made such a show of himself in the European parliament last year. I have a gut reaction to this type of stuff, not getting logical and reasonable at all, just sets me ranting - I posted the link to the Irish times article on said UKIP plans, I was so furious. Still am. Good that you wrote about it.
There is an amazing amount of anti-European sentiment out there among people who are glad to take the Euro or shilling or pence for the past number of years and forget what Europe has done for us, those too young to remember what life was like pre-EEC should take a history lesson, Ireland had to be dragged kicking and screaming into the 20th and 21st century in areas like equality, women's rights, contraception access, and divorce. The priest-ridden country that sheltered its shame in magdalen laudries and industrial schools would still rule the roost if Ireland hadn't the confidence it gained in recent decades to root it out and expose the corruption at all levels, moral, political and financial.
I think we have a lot to thank Europe for, not to be pulling up the drawbridge now.
Coir and their evil cohorts need to be kept well at bay.

You complaion of UKIP telling the truth, and ignore the fact the EU elites have come to ireland to support the surrender of democracy and freedom. Unless you understand the REAL implications of this treaty, do not be so confident in your critisism. Your very democracy, independance and freedom is at stake. This is your LAST referendum if you fall for their lies and deceit! Why do you think they have denied the rest of Europe a say in this? Because they would say NO, just as the French, Dutch and Irish have already done!!! This is word for word, the same treaty as you have already voted for, and has the same implications as the Lisbon Constitution. Please do not fall for it!

My diifculty with UKIP is that they are using the Irish refernendum to suit their UK agenda. They've no interest in Ireland whatsoever, they oposed the Anglo Irish Agreement. The facts are that Spain & Luxemburg voted yes, France elected Sarkozy in the the knowledge that he's implement Lisbon. The Germans re-elected their Chancellor who last week endorsed Lisbon. Do you actually beleive that the German's Poles and French are all going to hand over their independence, democracy and freedom (your words) to the other 24 mations who've signed up to Lisbon?
None of these nations came down in the last shower and on Friday you'll find neither did Ireland!

As you well know this Lisbon Treaty is a re-hash of the EU Constitution, rejected in two out of two referendums (France and The Netherlands 2005).

The Irish people rejected this treaty in a referendum in 2008.

Who in God's name cares about the UKIP?

No means No Joe, stop flogging a dead horse.