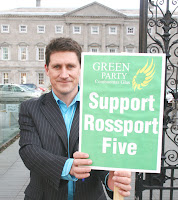 I was once thought that Fianna Fail were unique because they were in denial. I stand corrected. The programme for government has finally proven that the greens have lost touch with reality too. Our own Eoin Colfer would be proud of this, its up there with some of his own books in terms of quality fiction.
Senior ministers have spent a lost week negotiating with one another to deliver the following; Green procurement to be introduced across the public sector to promote the green economy, 127,000 jobs to be created in the Green and Smart economies over the next decade, a cap on incineration capacity, Real time passenger information for 500 bus stops in Dublin and Cork by end 2010, a Bray to Balbriggan cycling and pedestrian route and registration for off road vehicles. Water charges, abolition of PRSI ceiling and introduction of carbon taxes but interestingly no time lines or dates for delivery.

The big news item is a decision not to increase college fees but an admission that college registration fees are not covered by the agreement. The Greens claim to have reversed the education cuts, in fact they haven’t. Last years cuts removed over 2,000 teaching posts. This plan proposes to re-employ 500 over 3 years. They will ban stag hunting and phase out fur farming over3 years. 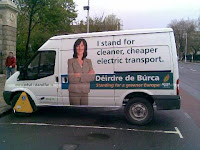 Ciaran Cuffe said if they hadn’t agreed by Friday lunchtime the minister would walk. Given how underwhelming the programme is I wonder what was going on? This deal could have been agreed in 5 minutes. Was the stage managing of the discussions designed to distract from the John O’Donoghue affair? Is it a case of using sandals to distract from scandals?
The Green Party has decided to continue on for another 3 years. They’ve accepted crumbs that don’t even have a use by date! They will continue as lobby fodder to bail out the Baileys. I’m pleased at one thing and that’s their decision to leave circuses untouched, God knows you need something to laugh at in these recessionary times. There’s no sign of any turn around on the horizon. Presumably they’re hoping against hope that something will happen and that their party will be saved from extinction. Right now I can’t see that happen. What happens to them if the slump worsens?
Posted by Unknown at 5:06 PM

Earlier this week the papers were setting out how the Greens were now converted to a single tier health policy. No sign of the single tier now. Crocodile tears from the Greens?

Net Present Value For Dummies - By a Limerick Language Teecher.


NPV of NAMA to Taxpayers: €38 billion in lost interest

Escape from Ringsend's lousy bicycle paths and incinerator, at last.

Retirement in Bali. Lucrative directorships in the Green Friends-of-EPA Industry.