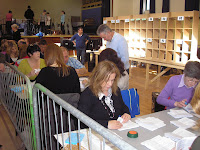 It won’t be long now until we know the exact result of the second Lisbon Referendum. Voting has been patchy throughout the country and throughout Wexford town. My own ballot box was at about 20% by lunchtime yesterday. I’ve noticed a trend in voters turning out earlier in the day at the 2009 local elections. This is more a lifestyle change as opposed to the rush to vote after tea.
Middle class areas seem to have voted heavier than working class areas within Wexford and this may have been a trend elsewhere. For supporters of the treaty it is vital that Wexford is won. Wexford is a bell weather constituency in Ireland, as Wexford goes so usually does the country. The only exception was Wexford marginally opposed Divorce in 1995. Last time the treaty was lost in Wexford by about 9%. If Lisbon is to be won nationally there is no better place to look for the indication than Wexford.
At the last referendum a high No vote was recorded in Kilmore Quay as fishermen voted No in protest to EU policing of the industry. Elsewhere a late call by the farmers organisation saw the support among farmers for Lisbon well below the usual support for the EU. In Enniscorthy a high No vote was believed to have the local response to the sacking by Brian Cowen of local Minister John Browne. Some people voted no last time in Wexford because the Department of Environment introduced a SPA on Wexford Harbour. The trends toady are less clear other than rural and middle class ares are more supportive than working class areas. We must ask why? 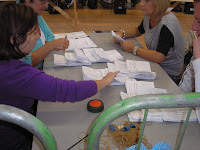 I’ve heard no mention of these issues during this campaign. Having seen the votes being counted today I believe that Wexford will vote Yes this time by a significant majority. The Yes vote will be in excess of 63% and could be as high as 67%. It’s also clear the treaty will be carried nationally. The pictures are of the scene this morning at the Wexford count in Clonard Community Centre in Wexford Town.

So why has Ireland gone Yes? I believe myself the emergence of non-party groups like Generation Yes or Ireland For Europe allowed the argument for Lisbon to be put in a non- party political way. Moreover the emergence of UKIP and return of Libertas injected the negative notion of outside interference to the electorate in a way that Sinn Fein or Coir could not have damaged the No campaign. Having said that the posters by Sinn Fein and Coir suggesting that incomes would drop because of Lisbon were known by the electorate to be wide of the mark and failed to attract support. No lost it rather than Yes winning it.
One final reflection, the debate of the last month was not precisely what was in the treaty but what people thought the effect of the treaty would be. There’s an important difference. Perhaps as the country moves on it’s something we shouldn’t forget
Posted by Unknown at 12:22 PM

Why is Libertas - which is led by an Irish citizen - "outside interference"? Because Ganley has an English accent? His parents are Irish and that is an accident of birth. The attacks on Ganley's Irishness is deeply offensive to the Irish Diaspora and hundreds of thousands of Irish citizens born to Irish parents who live in this country. As a "no" voter I regard the result as based on the fear - not the will - of the people. The concerns about the direction of Europe have not gone away. They were just swamped by the recession - which had nothing to do with Lisbon in spite of the lies of the yes campaign.

It is disgraceful that a second referendum was held, and that the 3 main parties abandoned their people to curry favour with foreign powers. There is no consistency in claiming to be defending Ireland from British UKIP interference while simultaneously supporting a Treaty giving the UK a 12% say on EU law (where 80% of our laws come from) while Ireland will havbe a 0.9% say. I also look forward to seeing all these wonderful jobs that are going to be dropped from the sky by the fairy-godmother from Brussels!

By the way, I don't regard my no vote as a no "to Europe" any more than a no vote on a domestic issue would have been a "no to Ireland". I support EU membership but not the Lisbon Treaty. I bitterly resent the hectoring, bullying tone from figures on the "yes" camp to 594,000 no voters who have noone representing their point of view in Leinster House, in spite of being 32% of the electorate who voted. Such a dichotomy between public opinion and politics is unhealthy for democracy, which requires dissent and choice to thrive.

You never did give us the full results, I suppose I better get them myself and publish them.