Ali’s defence of developers is not up my alley

I’ve always had respect for Ali Hewson. She has in the past supported many noteworthy good causes. It’s easy to dismiss such work as an excuse to expunge your guilt feelings about wealth and use your concern as a vehicle to socialise among the elite. That may be the case for some who go to these society charity events but Ali has a genuine track record on issues of child welfare internationally. She may be expert on how to divert cash to causes but that doesn’t make her infallible. While her husband collects US Presidents, his missus it seems collects builders!

I fully understand that when you take up such work, you throw yourself into it whole heartedly and often can loose sight of the bigger picture. At least that’s what I’m hoping is behind her recent remarks.
Ali says that the media treatment of developers who frequently attended her charity bashes is unjust. She justifies this criticism of the media because the developers who attended the society bashes were generous to her charities and regulars at the celeb fuelled bashes!
It strikes me as though the masters of the universe who controlled our economy have had enough of the ordinary people who are now forced to bail them out. Last week AIB decided to make an inhouse appointment to the top job contrary to guidelines, Sunday saw NAMA signed into law by the President and this week sees a public service strike in protest at government cuts in public service pay. It’s quite sometime since the IBEC spokesperson on the radio last wowed me with their “We’re all in it together” line.
The cynic inside me says that those with wealth have had enough of the ordinary

person’s indignation. They desperately want to go back to their addictive old ways of speculating as it’s more profitable than anything else. It’s a bit like Lassie making its home! Nothing will get in their way, not even the market reality. Let me quote one of the creators of the slump in 2000, Mary Harney; 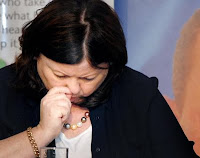 “What really makes Ireland attractive to corporate America is the kind of economy which we have created here. They find a country that believes in the incentive power of low taxation. They find a country that believes in economic liberalization(She spelt it with a “z” rather than an “s”!). They find a country that believes in essential regulation but not over regulation. On looking further afield in Europe they find that not every European country believes in these things….This model works.. And I say if it ain’t broke don’t fix it… There are some who want to create a more centralized Europe…I don’t think it would be in Ireland’s interests and I don’t think it would be in Europe’s interests either ”
You now this speech better as her Boston or Berlin speech. It’s nearly 10 years since she delivered it and it took just 7 years for her analysis to collapse. What is stunning is that the economic liberal right in Ireland have no other approach to reviving the economy . The attempt to take the nation down another cul de sac is under way,
For the Harney’s and Hewson’s of this world there can be no going back, no re-creating a second bubble. Fool me once shame on you, fool me twice shame on me.
Posted by Unknown at 7:52 PM