The sins of the fathers 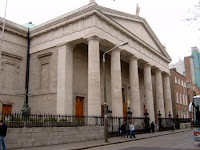 I met John Barrett in the shop today. I’ve known John for years as he has an intense interest on schoolboy soccer and our teams often met on the soccer pitch. John is a survivor of child abuse who spent his early years in the institutional custody of (I can’t use the word care because he didn’t get any) the Christian Brothers. John is justifiably angry at the treatment he received from both the state and the order that ran the institution. He established an organisation called Right of Place. He is at present writing a book that sets out his experiences and it will be published in Ireland and Britain in the new year.
John is not surprised at the findings of the Yvonne Ryan report into Dublin archdiocese. Neither am I. The findings and the modus operandi of all responsible is broadly similar to what went on in Ferns. Bishops prioritised containment of scandal in Ferns and Dublin. Garda inquiries ran into the sand in both diocese when they went up the line from investigating younger gardaí. The Ferns report was released four years ago and at the time I thought that there was nothing that would suggest that the level of clerical abuse in Ferns was no less and no more than what was going on elsewhere. At the time the suggestion was made that because Ferns had its own seminary that the small number of seminarians made abuse easier and that the problem may be ring fenced in the south east. This excuse cannot be rolled out now. Other dioceses have question marks over leadership and the values taken when dealing with clerics accused of sexual abuse.
The Catholic Church is like any institution. The desire to protect the institution from scandal apparently superseded all. It is no longer about a church leader hiding behind health or an alcohol addiction. No system failure in Dublin. The system worked and worked well down through the years in the interest of the institution and against those of the victim. Those in authority in the church and the Garda colluded in what today we call reckless endangerment and effectively the perversion of justice.
At the time of the inquiry I met Dr Walsh who was the administrator of Ferns. I think he had the most difficult job in the Irish church and he came out of affair with his reputation enhanced. That’s why I’m disappointed when I heard him on radio today dodging the question as to whether investigations are now needed in other diocese. I think they are.

Don’t forget that the late Fr Fortune was effectively run out of the boy scouts in Belfast within weeks of reports of inappropriate behaviour there. How can standards be better 25 years ago in the boy scouts, a voluntary organisation that’s just 100 years old than in a 2000 year old church that shortly will mark the birth of its founder? There has to be the same level of commitment in child protection in all diocese otherwise we’re condemned to repeat the errors of the past. It’s not enough for the state to stand back from the issue and set the standards and allow self regulation of child protection. In economics we’ve seen how self regulation doesn’t work. The state has a duty to those of our citizens who it shares the responsibility for ruining their lives in the past and also to today’s children

John Barrett and I talked about the importance of his book. Survivors not only need to tell their story but to get vindication from our society that they were the victim. That’s why there is a need for a further enquiry. I’d rather it to be quicker than our tribunals for the sake of the victims and the church itself. It is in the interest of the Catholic Church and its adherents that best practise is in place asap in a clear and transparent manner.
I hope John’s book sells well, I hope that its still read in 30 years time and that people then will ask how did we have a country like that but more importantly what did we do to change it, and Yes negligent church leaders must resign.
Posted by Unknown at 4:18 PM