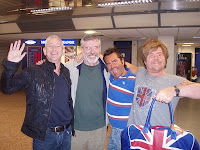 Was I hearing right? A party leader has given an interview to RTE in response to a UTV programme fronted by the journalist who exposed both Kincora and the Brendan Smith affair that brought down Albert Reynolds and an article in the Sunday Tribune showing his links to his brother after he first became aware of suggestions of abuse towards his own daughter. That politician just happens to be Sinn Fein leader Gerry Adams.
I wonder why this issue is coming out now just before Christmas, is it intended to bury a legacy issue in the annual festive news famine? Adams says the matter was certain to be revealed at some stage so why did it not come out before now? Is the affair being news managed by SF? After all it’s not as if Sinn Fein hasn’t done this before, a few years back the Donaldson spying affair broke days before the Christmas holiday. This is a very serious matter for both family and Sinn Fein within months of a British General Election. Northern Catholics are conservative and mass attendance is higher as there is a stronger identification with the Catholic Church for obvious reasons. I don’t go along with the line that it is a matter alone for the Adam’s family for a number of reasons.
Let’s examine what Gerry Adams did when he knew that his brother, Liam, was abusing his young daughter. The Sunday Tribune reports that Liam Adams was a youth worker in Dundalk in the 90’s at a time when Fr Brendan Smith’s extradition papers were gathering dust on a shelf in the DPP’s office in Dublin. Adams says it was at a later time that he worked in Dundalk and that he had his brother expelled from Sinn Fein. Surely Adams should then have advised the Gardaí in Dundalk of the risk to the young people he was in contact with? Instead he promoted his brother as a potential Sinn Fein candidate in Louth for the 1997 Irish General Election. A picture of Gerry and Joe Cahill posing with the groom at his brothers wedding in Co Louth poses a number of questions in relation to claims that he distanced himself from Liam. 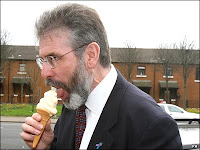 It’s 10 years ago since the Children First policy document was published in relation to protection of children from abuse in the south. Gerry Adams has shown himself to be out of touch with southern politics, one time calling Labour’s 82-87 Health Minister Desmond Barry and in the 2007 debate making Michael McDowell look smart! It doesn’t seem like he’s been in contact with the Southern health authorities in regard to his brother despite the policy. The Dundalk project says it had no contact in relation to possible risk surrounding Liam Adams.
But the ultimate question Adams must answer is why did he not do more? Do you need to have a policy document to tell you how to behave when you hear your niece is being abused by your brother? Who provided the references for Liam Adams to secure a job as a youth worker? This was at a time when the IRA’s Nutting Squad ruled with an iron fist within the Republican movement, punishment beatings for anti-social behaviour were regular features of life in the North. The prospect of a green Kincora now lurks beneath the surface. Set against this backdrop, life and death was dispensed mercilessly by an organisation headed up by a man who ignored his brother’s abuses. The year that Adams learnt of his brother’s abuse was also the year when 11 innocent people were killed at Enniskillen.

Having listened to various bishops excuse their behaviour in the last decade as they re-shuffled deviant clerics round the diocese, I find it hard to see great difference in how Liam Adams travelled around trying to build up his political career from Donegal to Louth. 22 years is a long time to wait for justice and I hope that Áine Tyrell gets her day in court and her abuser is jailed. If any person in Southern Ireland behaved as Adams did there is grounds for investigation under reckless endangerment. In any ordinary political party Adams would be shown the door, however this is no ordinary political party and he may well hang in there for the medium term. This may rebound on Sinn Fein in the British General Election. Watch this space.
Posted by Unknown at 10:16 PM