Paul Kehoe is a politician I know quite well. He’s a decent and honest guy who speaks his mind. I’ve a lot of time for him personally even though Labour and Fine Gael would have clear policy differences. He reflects very often what ordinary people say in Wexford. He’s been in trouble before about one or two things he’s said, never though in as much trouble to merit the front page of the Indo. His present predicament reminds me of the old quote from Marx; (Groucho not Karl!) "There is one way to find out if a man is honest -- ask him. If he says "Yes" you know he is crooked." 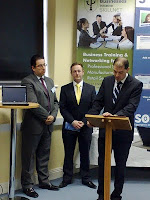 Paul is on the receiving end of missive from a pensioner who earlier this year promised to return a €1m payment to a financial institution that owes its solvency to the Irish taxpayer. As we know form Budget 10 this government backed off pursuing pensioners to shore up the economic slump, (well, not rich ones who give FF the odd contribution) so it seems that Dail time is now going to be given over to extracting from Deputy Kehoe an apology sufficient enough to appease the bruised ego of the former financial guru better known as “Fingers”. Mr Fingleton has yet to make good his own promise to repay a €1M bonus and there isn’t any apology for the INBS long suffering shareholders who he treated disdainfully at many AGM’s.
Is there anything that brings politics more into disrepute than ordering a deputy to apologise to Mr Fingleton because Mr Fingleton is aggrieved by the suggestion that he was called a gangster? Mr Fingleton was in charge of the Irish Nationwide Building Society at the time of the bank guarantee. Within hours of the guarantee being passed a member of his family emailed potential investors abroad highlighting the guarantee in an attempt to attract new accounts to INBS. Woody Guthrie once said "Some men rob you with a six-gun -- others with a fountain pen.". Except in this case the person underwriting this transaction and signing on the dotted line wasn’t Fingers or the market but the Irish taxpayer! When he retired he got a pension scheme worth over €27M despite his Irish Nationwide making a loss.
Soon over €1B euro will be shovelled into Irish Nationwide because Fingers thought that the role of a building society was to help developers rather than those who wanted to buy houses. Fingleton’s decisions were so catastrophic that soon his zombie building society may well have to merge with EBS much to the latter’s chagrin. 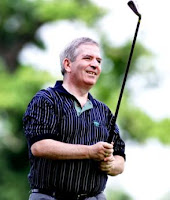 Irish Nationwide is the institution that fast tracked loans to Charlie McCreevy, Celia Larkin, disgraced FF Senator Don Lydon and other FF politicians. In McCreevy’s case rules of INWB that don’t allow 100% mortgages were broken on a mortgage in excess of the properties actual value. While a rule is run over the rest of us, the FF golden circle spun around the twin axle of Anglo Irish and Irish Nationwide. Most people believe that what is in the public domain about the golden circle is only the tip of the iceberg. Perhaps the published facts don’t raise eyebrows in banking circles but in the view of many people there’s something of the night about it all. Charlie McCreevy famously favours light touch regulation at one time blaming the Northern rock collapse on strict regulation by the UK government!

Paul Kehoe’s only offence is to repeat what many people are saying because they have interpreted the toxic relationship between Fianna Fail, bankers, developers and auctioneers. A quick google search of the Camorra gangster network in Italy shows they gained social prestige through political patronage, they targeted real estate, sold bogus treasury bonds to access quick capital. There’s one record of the Russian Mafia paying off the Camorra with a bank! They put a premium on acting as the middle men between politicians and the local community because of the power they had. Fingleton might well consider his bruised dignity and prefer not to go there! He protests too much!

If Kehoe owes any one an apology it may be to Irish gangsters. Since their establishment by the Rainbow government CAB have done well pursuing gangsters. Has the time come to for a beefed up CAB to pursue our golden circle or should we look on while failure is rewarded? Its time to give people like Fingers Fingleton the 2 fingers!
Posted by Unknown at 4:53 PM