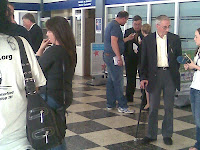 Today was a very succesfull day’s protest at Waterford’s Plunkett Station. With just 2 days to the NTA decision on the future of the Rosslare Waterford railway, the campaign once more seized the initiative by staging a protest at Plunkett Station. Interestingly there was 3 TD’s including Brian O’Shea, FG by-election hopeful Paudie Coffey, Jack Walsh Labour’s Deputy Mayor in Waterford as well as the chairperson of the SERA.
I’d seen Senator Dan Boyle’s tweet earlier in the day so along with Paul Kehoe, I was expecting him. Could it be that the Greens seem to be getting off the fence on this issue for once and hopefully for all. Could it be a straw in the wind that the NTA is coming down on our side that the greens don’t want to be seen off side on decision day and that they have a strong indication that Iarnród Éireann is going to be refused permission to withdraw rail passenger services? 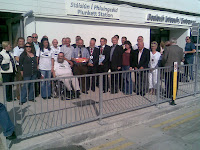 Perhaps Dan’s visit was a subtle way of sending a message to FF given the current disharmony in government about Anglo that the greens are there own men (as Miley used to say “First and Last”). Given the fact that the line runs through Carlow Kilkenny which is represented by Green Minister Mary White, the Borris woman was nowhere to be seen today. If it is that the Minister Cuffe is going to hang tough on the issue and eyeball his senior Noel Dempsey then I welcome it but if it was that Dan’s flying visit was purely about optics, I think that I’ve been used. Friday will tell a lot!
For some strange reason the SRG Chairperson Tanya Fenelon was asked to leave the station!
It was home for us all after 30 minutes and Irish Rail got their station back. However in light of their offer to share the line with a heritage operator, perhaps it won’t be too long before it’s once more a shared station?
Posted by Unknown at 11:28 PM