Time for the oppositon to grow up 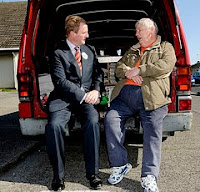 I’m in shock this week end. Yesterday on Saturday View Alan Shatter launched an attack on the Labour Party that would have made Dermot Ahern blush. No policys says Alan with a straight face! Like hello? Where did FG get the policy Earn and Learn from or their opposition to the bank bail out for sub ordinate bond holders from? I nearly cracked up listening to him with laughter when Alan the supporter of Israeli occupation on the West Bank went on to call Labour arrogant! And it is initially easy to smile but there is the bigge picture for all of us in opposition to FF & the Greens. Will this type of dig on a programme where there was no Labour spokesperson to defend the party bring forward the day when this dreadful government is sent packing?

Opened the Sunday Tribune today and found out that my mayoral colleague in Dublin has branded some Labour colleagues as Anti-Catholic ! To make matters worse Lord Mayor Gerry Breen who still holds on to the title Right Honourable went on to tell his audience of impressionable teenagers in Young Fine Gael that they should do their best to make certain that the cling ons in the Labour Party don’t dictate matters in the next government.
There’s telling you! Not a vote cast yet nor one counted neither and already someone in Fine Gael has the hand bags out! In haste to curry favour with the youth wing His Worship compared Labour to the fictional warrior tribe from Star Trek the Kling ons! Less Shatter and more Shatner perhaps?

Is this really what passes for intellectual discourse nowadays in Dublin City Council? I hear that Gerry is being considered as a running mate for Richard Bruton in 3 seater Dublin North Central where he will have a tough fight. Sean Haughey and Richard Bruton will hold their seats here while the final seat will be between Labours Aodhan Ó Riordáin, Independent Finian McGrath and the bould Gerry. Gerry clearly doesn’t require Labour transfers since he’s anxious to diss the Labour Party. Dublin NC is hardly a religious hotbed so the question must be asked who is he trying to appeal to in this bizarre “anti-catholic” attack on Labour?

Is jealousy of the progress that the Labour Party is now making becoming the only thing that unites the 2 wings of Fine Gael? Are some in FG taking the election, the Labour Party and the people for granted? History tells us that John Bruton learned a valuable lesson after the 1992 election on the opposition benches for 2 years longer than it should have been. Are some in FG failing to learn the lesson in history?

If so there will be 2 outcomes for those FG deputies that try this on. First there will be a reluctance among Labour supporters to give preference votes to these FG candidates. Given that the Green Party will implode and FF is a non runner with Labour, I forecast that Sinn Fein candidates may well pick up preference votes from Labour candidates as will independents. This will cost some FG candidates their seats.
Secondly Labour may not be inclined to settle for a FG deal. Wait and see the result of the election when it comes has always been how I see it. Every vote counts and every seat matters. Its not a question anymore of a pre-election pact or indeed a transfer deal. 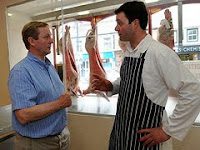 The present polls show that there are only 2 potential Taoisigh in the forthcoming GE, Enda Kenny (FG would be laughed out of court to dump him shades of our late and lamented Mick O’Leary in 1982 about any heave!) and Eamon Gilmore. Lets have a debate between the 2 of them on TV and leave Cowen for the minor match debate. Its time to have a mature debate with FG about issues rather than name calling that insults those who want to see some positivity rather than tired old and boring empty FF spin about absence of policy. Its nothing personal against FG but every dog has its day and it looks likely that FF is heading for the knackers yard so who will take its place? Could Ireland quickly go from being a 3 party state to a 2 party state where Labour and FG oppose one another like in any normal democracy while a FF rump look on from the side lines?
If that was what the real impact of the slump has been FG shouldn't worry, we'll all muddle through.
Posted by Unknown at 9:27 PM

I couldnt agree with the tone of your article more Joe. We have had the occasional disagreement over social networking sites, but any criticisms that I might have been making were nearly always aimed at Fine Gael, who are relying on Labours support to have any chance of forming a government. The fact that Gerry Breen would make those comments at a time when Labour are so popular says it all. You know it, I know it, and most of the country are coming around to the idea; Labour are in a position to form the first government in this states history that wont include some variation of Fianna Fail or Fine Gael. I hope that there are truly historic days ahead.

FG may just be on the verge of snatching defeat from the jaws of victory. Having said that I cannot see based on opinion polls at the moment Labour getting more than 26% at a General Election and FG getting less than 28%. FF will do much better on the day as personal votes return to support while some first time FF candidates untainted by the past will poll well among FF suporters.
I've always said that the next election is a 3 way contest, lets wait and see how it pasn out however on the figures I've put above there is no way that a govt can be formed that doesn't include FF or FG.
Question is could the next govt be FF & FG? If Labour is not there then I would welcome that as the end of civil war politics.