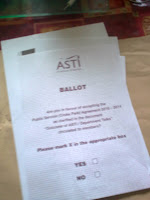 The envelope arrived at the week-end containing the ballot paper. ASTI is now balloting its members on acceptance of the Croke Park Agreement. While we voted to reject Croke Park last year as members of ICTU we’re obliged to discuss its implementation and its these proposals that are now before members. Last year I voted no. Having seen how the industrial landscape has changed in the last year I’m now having a long hard think about it.
There is no suggestion that the ASTI will resort to industrial action if the union votes to reject the deal. The CPA does offer the unions abiding by it protection for earnings in 2011. That’s effectively what the state gives. What the public service gives is flexibility (i.e. concedes to government what the department had long pursued, PTM outside of school hours, filling in and additional 33 hours to be worked in the working year).
I voted against the CPA last year because I preferred to protect teachers jobs. Personally I’d accept a pay cut over a reduction in working conditions. I’d prefer to protect the jobs of younger teachers, those with mortgages rather than seek to protect my own income for the moment. Let’s be honest there is a low level of morale among public sector workers. They’ve been the subject of abuse and denigration for some time. A poll last week in the Sunday Indo showed that 54% of Labour supporters would support a reduction in the numbers. Support among supporters of other parties for cuts were much higher with 69% of Sinn Fein supporters wanting to see job losses. In the north SF have frozen the pay of all public sector workers on as little as £21,000.
But there are 2 issues that are making me think about voting at all. One is the Fine Gael proposal to get rid of 30,000 public sector workers on top of all that. I think that that would be disastrous. I don’t deny that there are people in the public sector who want to go and that if a voluntary redundancy package was on offer that they would leave and take their pension. Before Christmas such a scheme was on offer at the HSE but there weren’t as many takers as management thought there were.
The other thing that concerns me is the upward trend in mortgages. I’ve a mortgage with Permanent TSB. It seems that interest rates are now increasing not because of any ECB decision but because banks want to increase their liquidity. It’s likely that other banks and building societies will follow up. There is less competition in the banking sector following the withdrawal from Ireland of HBOS and the ECB/EU stated objective of restructuring the banking industry; i.e. closures. Mortgage interest relief is only available for 7 years for first time buyers.
The brunt of this move is going to reduce the amount of disposable income for home owners like public servants. Where is the money that will re-boot the economy? What worries me is that there will be less spending rather than more spending in the economy. That in turn will prolong the slump, not any decision on the part of public servants to implement the CPA.
So when I vote today on the proposed deal, I really get the feeling that power to actually decide your future in the workplace and power to participate is gone. Regardless of how I vote and I’m still veering towards No, most workers feel it ultimately won’t matter. There are lessons for all of us in the context of a general election. What’s the bet it’ll be a low poll?
Posted by Unknown at 6:13 PM

Good piece. Agree totally that a stimulus package is needed immediately, the new government needs to clash heads and come up with that asap and have an emergency budget. People are screaming, that will only drive spending down and we know where that leads.

Re. the CPA, it's a dead duck, don't worry about it. Welcome to the private sector. It's cold out here, wrap up warm.

Finally, may I respectfully ask you to check out my campaign observations? Trivia, but hopefully amusing. A voters eye view.