Back on Civvies Street 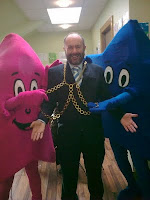 In the end it only took 20 minutes to bring down the shutters on my year as Mayor. As someone who was not from the town it was a completely different experience to what I had expected. I pointed out last night that our town is a number of communities, geographic, cultural, artistic, sporting commercial and racial. Its only when you get to be Mayor that you really appreciate the interactions between these. Yes there is a lot of hardship but we’re not a place on a map in the south east corner of Ireland, we’re a community regardless of how wealthy or poor we are economically. These values remain strong and that is what makes us as a town.
The role of Mayor has changed and is now more about motivating and encouraging rather than using sole discretionary powers to shape people’s lives. That doesn’t mean that there wasn’t the occasion when you intervene on your own initiative. There was. Legally the officials could well send you packing however politics means that the official should listen to you in the interest of explaining why you feel they could have made a better decision. No table thumping, No shouting, just straight talking and then a resolution. Usual stuff in most councils. 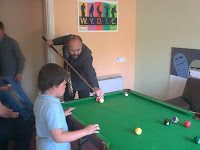 Into the future you wonder about how many discussion in a council will be about finding someone to do something as opposed to should we do something ourselves. Volunteerism, outsourcing, rationalisation, privatisation, cutting services. All options that change the nature of the debate. It pits the council and the market as providers of services as opposed to providing for community’s needs. And who is in that market space and what should the response be if one of the providers is also state owned. Where does the local authority stand in the context of Croke Park?
Being Mayor was a great experience, Key public events are the return of the victorious Wexford Camoige team, Barry Day and Opening night of the Opera, the All Ireland Drama Festival and the St Patrick’s Day parade. But it was events that were low key where you meet small numbers of people that really struck home, meeting a group from a marginalised community in Wexford who exchanged with Latvia, watching the opening of Coolcotts Community centre, speaking at the opening of an exhibition in the Arts Centre. And meeting a real hero John Giles or Vincent Brown! 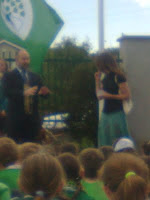 So now it’s all in the past. As one Labour colleague remarked, you’re better off leaving office having regretted not saying something rather than leaving regretting something you’d said. And yes there were the monthly meeting and the chairing of the councillors and arriving at decisions… eventually in some cases. During the time I’ve tried to blog on topics that were outside of local issues within the town. On reflection that was the best course but now it’s back to civvy street. Next meeting in the chamber is Monday next and its back to the usual seat on the Labour benches, a lot has changed but a lot is still the same.
Posted by Unknown at 2:06 PM