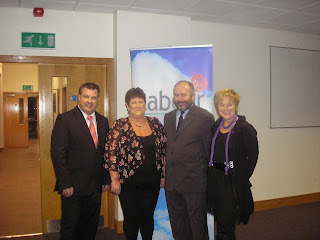 It’s exactly 10 years ago since I was first elected by Labour members to stand in the local elections.  Getting selected early was a great advantage in winning a seat.  At the time I was relatively unknown and had a job to do. Being selected meant I could get out and get organised.  Being selected is the easy bit, you’ve still got to find your vote.  So ten years on,  with a significantly different local authority and election ahead old ways what worked well then will still work today, other parties will have their own strategy.
Our ticket is significantly different to 2004. Ted Howlin is retiring from the council. Ted has been the cornerstone of the Labour Party in the council or years.  A rock of good sense and a cool head in the middle of a storm.  He first stood for election in 1974, the Howlin name has been on the ballot paper for 70 years in Wexford.  This election will see household names in Wexford missing from the ballot paper as others make up their minds on whether to stand or not. Fine Gael’s Pat Codd is the latest to retire as boundaries have taken his voters away from Wexford District. Padge Reck has also indicated he’s not going to stand.
Current Mayor George Lawlor who needs no introduction to anyone interested in politics in Wexford, joins me on the Labour ticket along with Bernie Mullen from Rosslare Harbour.  Bernie is active in TOPS as well as being involved in the maritime museum in the Harbour. She has a good base that has no current councillor. She’ll do well.
There is a lot of optimism in the Labour camp about our chances in Wexford District.  Selection conferences will be held in each of the other wards before Christmas as our team goes into action.  So more later on that.  Ger Carthy the son of the late Leo Carthy has also announced his intention to stand while People Before Profit/Socialist Workers Party selected Deirdre Wadding.  Another candidate who had previously declared has already withdrawn so the field is not yet clear and there will be I’m sure comings and goings to the political field for 2014. One thing’s for sure swords will be crossed!
The response on the doorstep is quite surprising. The perception that Labour candidates are being blamed and abused as Fianna Fail were during the general election is wide of the mark from my experience. The anger and the shame of the breaking of our country by Fianna Fail is still there, in my experience that is greater than any negativity towards Labour.  I envy those with the time to take the electorate for granted and who predict Labour will be wiped out with no TD’s and just 45 councillors. Nobody has voted yet.
Posted by Unknown at 10:52 AM