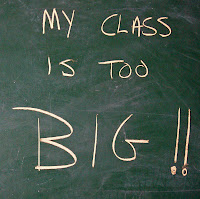 Yesterday was a red letter day for our youngest. She set off for her first time to Gaelscoil Charman, Wexford. Its our nearest co-ed primary and we’re really delighted how well our children have progressed at the school. The principal, teachers, staff, parents, pupils and wider community have a forged a unique bond down through the years of mutual support cast from a resolute campaign to have the school built in the first place.

Watching its construction 4 years ago rightly gave us a huge sense of achievement. Watching Sean Óg Ó hAilpín open the school gave pupils a sign that only the best would be provided into the future.

Within months however, a letter came home in the bag from the INTO school steward. Class sizes, something you cannot see from the road, were significantly up in the county and despite the government’s commitment to provide more teachers nationally the PTR was rocketing. Because Co Wexford’s population is increasing this puts great pressure on our schools. When Mary Hanafin became minister 4 years ago she dismissed her 2002 election commitment to reduce the PTR as a “noble aspiration”. The INTO organised a public meeting in Wexford in March 2007 to discuss the matter. Another promise from the government has come and gone and still the PTR remains high while Brian Cowen who was supposed to provide the money is now concentrating on bringing down is golf handicap.

Each Autumn the Department of Education release average class sizes based on returns from the previous school year. Co Wexford always features at the high end of this survey. The highest class size in a rural county in Ireland is usually in Wexford, In the past its been 41, 40 or 39. Last year, even Mary Hanafin was embarrassed. When Ruairi Quinn asked for the information it was withheld until Spring. She delayed the release of the results

A year ago Fianna Fail, The Greens & PD’s promised to reduce the PTR to 27 pupils per teacher. Yesterday my daughter was one of 29 pupils in a classroom. In this school year it is supposed to drop to 26. Nobody believes it will. What parents do believe is that teachers are struggling to cope in some schools. At Crossabeg near Wexford a school designed for 6 teachers was supposed to have opened its extension today. However, not a sod has been turned. Numbers have rocketed; teachers and classes work in cramped conditions. No rooms to teach in and no extra teachers to reduce the numbers in a classroom. 5 years ago FF built a pony palace at Punchestown instead of schools. Now the same government is opening golf clubs when they should be employing teachers.
That’s why INTO is organising a campaign in October on the issue of class sizes. I support the campaign of my fellow teachers. The Labour Party is also launching its own campaign to coincide with the union's campaign. Ruairi Quinn found out that over 40,000 pupils are still educated in drafty prefabs, 400 schools nationally are going nowhere on the building list. The time has come to make this government to put its money where its mouth is. The time has come for Labour's voice to be heard.

Hi Joe,
As a person working in early education I am well aware of the importance of reducing the pupil teacher ratio. Children learn in the context of human relationships and our teachers receive excellent training that emphasises the importance of prevention rather than remediation. If we address the PTR issue then we may reduce the need for special educational resources by providing the most important resource - a human resource. Teachers may then have the time to respond to childrens' needs on an individual basis and provide an inclusive education for all. In the long run we may save a lot of money by preventing the development of educational problems in the future.

I agree strongly with you in particular your view that the most important resource is the human input. Learning support in Co Wexford is significantly better at primary than secondary. Often the time allocation per pupil does not follow on to secondary, a stage I'd argue when it is most needed. A few schools account for 50% of the allocated learning support at Second level in Wexford. To be fair I think the values of the school in what they see their role as, is just as significant as departmental inertia.
Thanks for your comment and keep looking in as its an issue i'll follow up

Congrats on a fine post Joe. The government's hypocrisy on this emerges from a politically-motivated ideal which cherishes privilege and disavows equality. It is the weakest and those with most needs who suffer most from Victorian class sizes, and society as a whole is devalued with the watering down of a universal right to the best education possible.

I am teaching a 4th Class of 32 pupils, something which belongs to another era, just like FF's record on primary education at a time of enormous wealth for some in the country. Organising to fight this disgrace is the first step to consigning them to the dustbin of history.