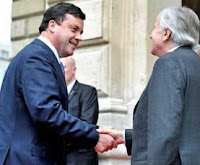 So there I was complaining about supermarkets starting the Christmas rush early and what do you know? Along comes Brian Lenihan with some festive cheer in the form of an October budget but as Brian says there’s no panic, the measures only take affect from January 1 with regard to taxation. That may be so but any increase in excise duty, VAT or petrol can be brought in immediately so buy now while money lasts may well be early and good advice for those on low incomes. I’m sure speculation will centre on which stealth taxes will be introduced. I wonder will FF have to swallow their opposition to Carbon tax and will there be a trade off with the Green Party so as to stimulate the car market? Its obvious that there’s an overhang in the supply of housing but with regard to cars we’re still below the EU average. Will the government try to revive car sales?
Interestingly the pressure will now be on to conclude a national wage agreement and such

a deal may well indicate what the minister will do on personal taxation especially for those at the lower end of the scale. But the need to introduce 2009 budget now as an emergency budget undermines one big claim Fianna Fail made at the 2007 General Election and that is that when you have an economic downturn they are the best party to be in charge. Clearly that claim is seen now as a dead duck, particularly in the light of Bertie Ahern’s comment that if he was in charge still the recession would not have happened. The reality is that Fianna Fail look rudderless with no real vision as to how to restore our economic fortunes. That’s why some commentators expect this recession to last much longer.

But it’s not the only reason. As one of the economies that is most globalised, Ireland is more vulnerable to international economic changes. The credit crunch is squeezing our banks, Banks are lending more than they’re bringing in, lenders find it more difficult to get mortgages, buyers hold back waiting for prices to fall further, Builders cannot borrow to open up their burgeoning landbanks. That’s just what’s happening in housing, Confidence in an economy built solely on a building boom has evaporated. Retail spending has collapsed, Multiples are closing their branches and retail development has stagnated. During the summer the Irish Stock Market index performed better than only the Vietnamese Stock Market.

Our over reliance on oil makes us susceptible to fluctuations in prices, food is rising in price, while the Euro is overpriced in relation to the dollar and Sterling. Our economy is split equally between the UK, US and EU.

That’s also why Labour has called for a retraining programme for those who’ve lost their jobs, investment in education and infrastructure such as schools, broadband and transport. This type of investment will leave the economy better placed to capitalise when recovery comes. Its time the government built something that people wanted not investors want. I hope for all our sakes that Cowen, Coughlan & Co are all up to the job but at the back of my head I have that sinking feeling that the Slump Coalition won in '07.