All 4 provinces head to Leinster House for education cuts demo

Molesworth St was chock a block last night as thousands of parents, teachers, and some pupils gathered to vent their frustration and indeed anger at the budget cuts that Minister Batt O’Keeffe is determined to roll out in schools around the country. The demonstration was organised to coincide with Labour’s motion condemning the cuts most notably the impact on Pupil Teacher Ratio, the disadvantaged and special needs education. The meeting was addressed by the leaders of teacher unions, patrons and parents associations, as well as Labour leader Eamon Gilmore and Fine Gael’s Education Spokesperson Brian Hayes.

Education Minister Batt O’Keeffe is determined to press ahead full in the knowledge that the greens are on board despite their agreement prior to entering government to increase the spending on tackling disadvantage and reduce further the PTR. It is clear that FF & the Greens have the numbers to see off the opposition and will hang together rather than hang separately. As a teacher I take exception to the minister claiming that teacher unions are h 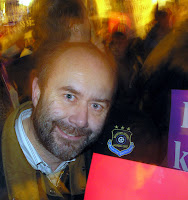 ysterical and scare mongering of the highest order. The facts are that school bus fees will rise to €300 per annum, Education for Special needs will be ignored and that English teachers will be limited to 2 maximum. Add to that the cuts in funding for LCVP, LCAP and Transition Year and the ban on substitution for colleagues absent on school business. This farcical plan will mean teacher reps unable to attend VEC meetings. I’ve already refunded money to 2 classes who had hoped to travel to a college laboratory in January. The suggestion that its only going back to 2007 is ludicrous, I remember 2007 very well, it was the year my soccer team won the Wexford Wicklow League Cup, in 2009 there will be no such competition, there'll be n soccer team. It is teams like this that make school tolerable for some pupils. when I go to watch Wexford Youths I take pride at how many ex-pupils play in the League of Ireland.

However the motion will further embarrass the Greens and FF. It is clear that next week will see farmers outside the Dail and this is a group that is well organised and will get a similar number to the gates of the Dail. In the back ground there’s also the possibility of protests by the disabled and I get the idea that for weeks to come the budget cuts will be a hot issue. Once Christmas is over and the fiscal position tightens even further as the banks call in the guarantee scheme and unemployment rises, I believe a supplementary budget is inevitable. Lets be clear it’s going to be like this all the way to the local elections in June. All the bluster about greens pulling out is just that, aimed at shoring up what’s left of their credibility.

Ask yourself this, if there was a general election and the greens succeeded in holding a number of seats who’d take them serious in any negotiations to form a government? Could you keep a straight face if sent to negotiate with Paul Gogarty? That may be in the future but what’s certain is that in the short term the issues that brought about 12,000 people onto the streets last night persist.

I was delighted to see a good representation from Co Wexford. The piece of video shows a number of parents from North Wexford marching immediately outside Leinster House. It was good to meet so many Labour colleagues; Cllr’s Michael Conaghan, Aodhán Ó Riordáin, Seán Ó HArgáin, Ged Nash and soon to be Cllr Maria Parodi as well as Roisin Shorthall, Eamon Gilmore, Ciaran Lynch and Michael D. Fianna Fail and The Greens may have inadvertently brought back to the Irish people a sense of community and collective concern. I wondered for an hour or 2 on budget day if Ireland had lost its sense of outrage as a result of economic affluence. Thankfully I was wrong. I’m barely audible with the noise from the demonstration. You can listen by clicking, unfortunately the FF & Green government is not for listening. On another note, I was pleasantly surprised as I drove up to Dublin to see that the hills around north Wicklow had a covering of snow. I'm dreaming of a white Halloween !
Posted by Unknown at 8:29 AM

Joe congrats on the demo during the week. It seems the government are preparing to dig in on this one but this should not deter us from doing the right thing and that is to campaign for a reversal of these cuts. Well done to you and all those other teachers, parents and students who took part in the march - Seamus

It is clear now that the government are not for turning on this one, I believe the farmers will bring a similar number next week. The issue will be kept alive and I think we'll be talking about this budget for a while. Then there'll be the supplementary budget!

Hello Joe, nice piece.
could you pm me to zeromccullagh@gmail.com
thanks, Noel