Batt’s Man U week-end no compensation for 70,000 education protesters 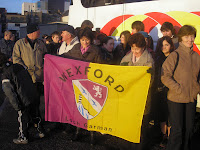 Yesterday while 70,000 protested in Dublin against the education cuts, the minister responsible was far from the maddening crowd enjoying the delights of the Sretford End! It seems that Minster O’Keeffe had a long standing commitment to watch Sunderland play Manchester United. Sunderland were of course managed by former Cobh Ramblers star, Roy Keane until Thursday and while all politics is local, once Keane had resigned as manager, you’d have thought there was no need for the Minster’s attendance.
Last June, I was on holiday in Manchester too. My family spent a wonderful afternoon at MOSI. This is the museum of science and industry. Central to the museum work is the importance of encouraging a child’s imagination. Our youngsters loved the art in the original Manchester 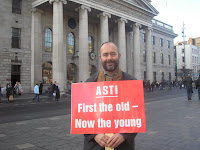 railway station, the world’s first. The emphasis is on hands on learning and activity. It’s fabulous! The teachers I met were aghast to hear that there was nothing with such an imaginative curriculum in south eastern Ireland. They may find it even stranger that Minister O’Keeffe has abolished financial grants to schools that teach chemistry or physics.
Is it too much to expect that Minister O’Keeffe might visit places like MOSI and come back invigorated for his brief? Somehow I think I it is, he seems more intersted in the nation's finances every time he talks!
Posted by Unknown at 2:11 PM