My crib with the trib!

I like the Sunday Tribune and I think the Sunday Tribune likes me. I feel I can say this because today’s edition follows up an issue I raised here in my blog about Anglo Irish Bank sponsoring a race at Cheltenham and as to whether it is appropriate into the future that the tax payer should support same. The paper also analyses the slump and deals with the controversy aimed at journalists who forecast the economic collapse and warned about commentators with vested interests giving advice as though they were neutral and not likely to benefit. The Tribune points out on Page 13 “Economists working for banks who told us that everything was just fine….the musings of these economists are still not accompanied by a health warning to the effect that they be talking in behalf of a large vested interest”.
Maybe someone in the Business section should have read this. Page 3 of the section contains a competition with a holiday as a prize offered by Irish Ferries. Page 6 has Phillip Lynch CEO of the One51 Group given free rein to call for a national government to deal with the countries economic problems. Mr Lynch is hardly someone who could be described as neutral on the economy, given that One51 Group owns a significant shareholding in Irish Ferries. One51’s wide portfolio of investments include recycling, alternative energies and management of commercial properties. It’s a along way from its origins in Irish agriculture as IAWS. 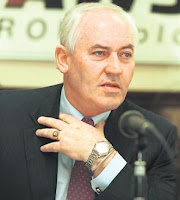 Irish Ferries parent ICG owns considerable land in Dublin Docks which has dropped in price due to the economic crisis. Fluctuating land values in turn are impacting on One51’s ongoing battle with Zoe Developments, Liam Carroll, owner for ownership of the once state owned shipping line ICG. Mr Lynch, of course, supported the replacement of Irish workers in the ferry company with non-union labour paid less than the minimum wage, many of them constituents of mine. As far as I’m aware Mr Lynch has no maritime experience but I’m always interested in seeing how Irish industry spin their arguments. Zoe Developments has, in the past been convicted for breaches of health and safety arising from a death of a construction worker on their many apartment blocks in Dublin.

Mr Lynch calls for a national government and party politics to be set aside so as to deal with the problems we face. He says the public sector cannot be sustained and there are too many councillors, state agencies and harbour boards. Members of state boards he feels “should waive their fees immediately as an immediate signal of their willingness to make a contribution to cost containment.” That’s very generous because as far as I know Mr Lynch is a member of the board of Coilte, the state owned forestry company and the National Paediatric Hospital Development Board. Not for one minute could I conclude anything else except that Mr Lynch has obviously already refused expenses for attending meetings of these boards or indeed perhaps like me as a member of Wexford Harbour Board, expenses were never paid. If the latter is the case why does he wish to see such boards abolished as there would be no net gain to the exchequer?

Mr Lynch also repeats the long made but inaccurate comparison between Ireland and Greater Manchester. All we have in common is population; no one made this comparison when Ireland was effectively an agricultural and manufacturing location. 20 years ago the comparisons were made to Denmark. Manchester draws it resources and raw materials from a much wider base than its local authority boundary. Instead Irish industry should learn the lessons from the past and develop an alternative model for progress. Re-inventing a broken model that Irish industry itself smashed and not the public service is not a future at all.
Posted by Unknown at 4:23 PM