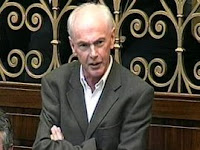 I understand that Tony Gregory TD has died this afternoon. I didn’t know Tony and he had been ill for quite some time. I first heard about Tony in 1981 when some student activists I knew in college campaigned for him in the General Election. He was educated locally in the inner city and was a local teacher before being elected to Dublin Corporation in 1979. He was a man with out any airs and graces. From the word go he broke convention refusing to wear a tie. It’s bizarre to think that could have been a note of controversy but it was.
He stood up to the gangsters that broke his community with heroin in the 1980’s. His political path started on the Republican left moving through to Community Activism in what is still today a very deprived and marginalised community. He famously spent a week in jail arising from his support for women trading in Moore St without a license. Needless to say his Gregory deal that saw CJH return to power significantly improved the housing stock in the inner city. As a child I vividly remember the tenements that previously stood in this area, his lasting achievement and legacy will be the houses that now stand in their place.
Tony was a strong supporter of animal rights, indeed I saw him on an RTE repeat 3 days ago hill walking in Connemara and his companions asking him about this very issue and I remarked as to how young and well he looked then. Tony also was a strong opponent of US involvement in Central America and he walked out when President Ronald Reagan addressed the Oireachtas in 1984. I often thought that he should have held ministerial office and retrospectively the best time for him to have got there might have been the 1992-97 period. The maths could have worked out to his advantage given he fluidity. I believe he had an understandably terse relationship with his Constituency colleague, Bertie Ahern, that’s very much to Tony’s credit in my book and I believe his supporters can reflect on his life in politics as someone who gave an awful lot to this community and constituency than many others. His door literally was always open to his constituents 24/7 before that term was coined. He was part of the Technical group in the last Dail and one of his key achievements was that he provided a voice for those whowere marginalised and that issues which in other large cities sometimes resulted in allienation or strife were highlihted. He was a genuine voice for the the voiceless. Fear fresin a raibh suim mór aige faoin gaelige.
It’s a sad start to the new year, my sympathies to his partner, family and supporters that he died at such an early age.
bout
Posted by Unknown at 3:04 PM