For the last decade Wexford town Library has been housed in a converted children’s playhouse in a car park to the rear of a shops. Not quite the landmark building that most people would expect to house a library in. The previous library was sold by the council about 10 years ago to facilitate the expansion of a hotel. While the staff have done their best to improve the service by opening longer and using the facility to educate and entertain all ages the reality is that Wexford needs a new library.
A site was identified by Wexford Borough Council and in partnership with the county council, our side of the deal was put in place. The new library was to be sited on the present Mallon St car park, as part 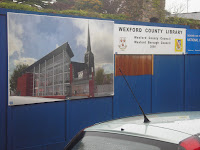 of a cultural spine linking the new opera house, the arts centre and the historic Selskar Abbey. A competitive tendering process resulted in a successful bidder and contracts were about to be signed. We thought we were there despite the present economic realities until last night.
At the end of our meeting an official told us the Department of Environment had advised that a new tendering process had been put in place and that the previous competition which had produced a contractor was to be superceded by a new tendering process. I believe that the new process will fix costs for which the state is liable. Fair enough , who will argue with getting more bang for your buck? However one wonders what was going on before? We now know that contractors bidding for state contracts are tendering significantly below what the tender documents proposed just 1 year ago. Where was value for money when it came to handing out PPP contracts in the last 10 years? Presumably the new contractors are still making a profit of some description so how much was creamed off the state in past I wonder?

The down side for Wexford is that according to the department it will be another year before the new tendering process will see a contract in place for Wexford library. In the meantime users in Wexford will have to tolerate substandard conditions as indeed will staff. What concerns me however is that given the reality in the economy at the moment that it may be quite some time before the library in Wexford is built. The council has decided to spend 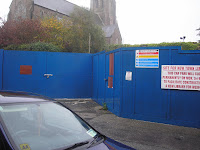 €30,000 re-surfacing the site so that it can re-open temporarily as a car park. I don’t share the enthusiasm of the Fianna Fail councillors who immediately welcomed the re-opening of the car park. I accept that the officials need every last bob they can get but what becomes temporary has a habit of becoming permanent, as the library staff will tell you themselves. They after all are temporarily housed for over 10 years now!
And what about the man in the middle of all this the minister? During the last General Election the Green candidate made his feelings known about the library in no uncertain terms. The greens dismiss the need for a new library. Read the 2007 Green agenda for Wexford at http://wexwicca.blogspot.com. Mind you he didn’t get much support for it but if this is also the view of the Minister then it’ll be a long time before so much as a block is laid in the site let alone a book opened.
Posted by Unknown at 4:51 PM