Isn’t John Gormley very lucky to live in the ideal world? When he goes to a conference in Poland he can take Ryanair there and back. No long conference drawing out negotiations into the night but the conference finishes up well in time for the Minister and his party to make the check in time and wait for their flight. Maybe soon Minister Gormley will follow further the logic of his fancy for Ryanair and get Michael O’Leary to taxi him to and from the airport in the taxi he uses to evade gridlock and allow Minister Gormley leave the state car at home. 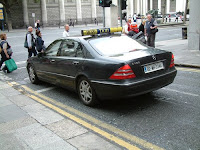 Interesting that John Gormley should set out his appetite for Ryanair at a time when it’s CEO has targeted the national carrier where the government holds 25% for a takeover. One wonders however given Ryanair’s new charges for additional baggage as to whether Ryanair will always turn out as good value as the minister believes. Given the possible size of a ministerial delegation, could you imagine paying the excess to Ryanair for luggage or hand baggage to be checked in on the spot for Poland to Dublin especially if the conference coincides with the Ryanair annual fares hike for the Christmas holdays?

Can’t see that as presenting value! Not to mind the terror on the face of the hapless Gormley should conference business over run beyond the Ryanair last departure and perhaps requiring an over night to connect the next day with the next flight.
When the Green Party entered government they made a precondition a Carbon offsetting scheme by which trees were planted to compensate for government jet flights and the CO2 emissions generated as a result. The intention was that government business would be carbon neutral. I’m not sure if the Green Party’s interest in Ryanair is motivated by one of cost, environment or the need to grandstand. The government jets are the sole fixed wing jet aircraft flown by the Irish Air Corps. Pilots are employed by the air corps as are flight attendants and paid an annual salary. The cost of the government jet at €8,000 per hour includes these salaries, if it’s sitting on the tarmac and Baldonnel it’s still costing, and that charge includes all 14 passengers carried so given a 2 hour flight and Ryanair’s routes to well away from main urban centres that you wish to go to and then transport has to be organised to take minister and officials the extra distance to the meeting. However

Ryaniar won’t refund if you miss your flight and instead will charge you through the teeth to travel if you arrive at the airport looking to board. So the good value that the minister thinks could be there may exist only in his mind.

I’ve a more effective way of cutting Ministerial costs. To be fair to the Greens I’m stealing one of their motto’s Reduce, Reuse and Recylce. How about re-visiting the number of Minister’s of State and reducing the number by 5 each cabinet member having just one junior? Reuse the cash saved on the minister, the entourage and the office and recycle the ex Junior Ministers as legislators?

Minister Gormley will shortly be re-locating to Wexford. The new offices for the Department of Environment are close to completion and work is progressing. The office is close to cycle lanes and the Bus Eireann stop as well the local town service stop. If the minister is as good as his word in the national media on reducing green house gases, I expect to see the Minister either alighting from an expressway bus or waiting for a connecting bus to the railway station as he sets out for Dail Eireann. I imagine he’ll be peddling down to the farmer’s market every Friday as it offers a great range of naturally produced local food at exceptional value. After all the Green Party don’t grandstand, do they?
Posted by Unknown at 12:33 AM