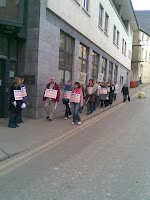 Today’s day of action sees public servants on the picket line in protest against the government decision to impose a pension levy. As can be seen from the picture, Wexford’s government buildings at Anne St were picketed by members of the CPSU today. CPSU members are mostly clerical and administrative grades. Many of the union members are female. As well as in the civil service their members are also in the post office and eircom. Interestingly the members employed in commercial companies are not liable for the pensions levy. The vote in favour of strike action was pretty substantial on a high poll. Anne St provides social welfare, revenue as well as probationary services for Co. Wexford. Elsewhere locally pickets have been placed on the offices of the Department of Social, Family & Community Affairs at Roches Rd and at Johnstown Castle. Many of the workers striking today earn less than €30,000 and one woman explained to me that she's be better off on social welfare rather than working in soical welfare.
The Deputy General Secretary of the union Eoin Ronayne acknowledges the hardship faced by private sector workers and rising unemployment, but says the union must defend its members through industrial action - if necessary. Mr Ronayne said it would not be the union's intention to impact on the public who need its services, but warned that any action would have to be wide ranging and widespread.
Later tonight there’ll be more queues as record shops open at midnight to facilitate those wishing to buy U2’s latest album appropriately named “No line on the horizon”. There certainly is no sign of any horizon for the country or workers on average rates of pay, even less of a sign of Bono turning up to revenue to pay his fair share of tax to the Revenue Commissioners. Bono shifted part of his tax liability to Holland in 2006 the year of Live 8. Surely if you’re going to pontificate on social justice and inequity about the world you should at least be prepared to pay your own way. The Edge is reported today as being happy with his tax arrangements, I wonder why? I understand that there was a picket outside the Department of Finance yesterday in relation to Bono’s tax arrangements. The officials were probably relieved that it wasn’t themselves who were in the firing line on this one. That relief may not last for too much longer, Apparently there’s a press interview on the way where Bono defends the indefensible.
Posted by Unknown at 12:54 PM

I can't see how Civil Servants justify this action in a time of such economic stormy waters. Those in the private sector have taken massive paycuts or lost their jobs.They have little security and many will have seen their pension fund vanish. At the end of the day it's the private sector that fund public servants and everyone should pay their fair share. The attitude of the CSPU and ICTU is only further damaging our economy and we all need to stop making excuses and get on with the job. For all the striking public servants I'll send you my sympathies when you send myself a former Dell employee, my Wife and four kids yours.

Sorry to hear that you've lost your job at Dell. I think the government have tried to play off the private sector agaisnt the public sector in the present crisis to some success.

My main gripe is that those on high incomes still don't pay their fair share. If you're on an income of €30Kper annum (as many CPSU people are) your pension will be €15k not too far off the non-contributory old age pension. Hardly the people who blew the boom.

Thanks for your sympathy Cllr but unfortunately sorry aint gonna do much and the Dole doesn't pay the mortgage. I suppose myself and my wife are lucky in some ways that we both knew husband and wife working for one multinational wasn't the most secure and put money away in a fixed interest account as much as we could.
The issue isn't pitting public against private, it's making our economy more competitive and a big part of this is reducing wages to comparable levels with other members of the EU. Prices should then fall in the general economy (one of the two basic economic principles of inflation/deflation)thus bringing cost of living here back to sane levels. The budget deficit is massive at nearly 10% our GDP-we need to reduce it, this levy is a way of doing that along with other budget cuts. Public servants still have a secure and pensionable job and to those on 30k-15k pension a year is still a good 6k above the state pension and lets be realistic, by retirement age the public servants you mentioned will have probably raised to 40-45k anyway-a hell of a lot who paid into private pensions will only get the 9k state pension if they aren't self employed, in which case you get zip!! I can't say I am a Labour supporter Joe (ex-PD if you want to lynch me!!) but I understand the ethos of your party and fair play for flying the flag incl. this blog. However is it time to work with FF like Senator Fergal Quinn was suggesting in the Sinead only yesterday? Such a big mess requires fresh thinking and some of FFs policies do make plenty of sense if allowed to run in my opinion.

I think there are a hell of a lot of misinformation being spread by our Government and the media. In fact there is not one person in this country who will not get a pension.

A person who has never worked a day in their life... never paid tax/prsi/pension contibution at all...will get a Pension.

At present the non-con state pension is MORE than I would get having paid my tax/prsi and pension contribution for well over 20 years.

I would have absolutely no problem giving extra if I was guaranteed it would be given to the likes of Dell/Waterford Crystal/Sasha or any of the other companies who have gone out of business.

But I strongly object to paying the bankers bonuses!!!

The Government wants to take even more money out of the economy. They want to take away what little spending power there is left. What good will that do?

How are businesses supposed to keep going and employing people if the few people still earning a wage have those wages cut?

And by the way, people think that their taxes pay civil servants wages...Civil Servants pay tax at the same rate as everyone else. We have always done so. We pay all the same levies etc..

Yes we are damn lucky to have jobs. We know this. But if we allow the Government to walk all over us what hope have the private sector got? We are the largest sector at the moment and we are fighting for equality for everyone..not just ourselves.

Liam I don't know how you can say that the private sector fund the public sector - while I sympathise that you have lost your job with Dell who have behaved disgracefully with their contemptuous treatment of Ireland Inc. by leaving as soon as it suited them, I do not accept being scapegoated because I am a public servant (nurse in HSE). As Joe says, the lower paid public servants will not get pensions much higher than the State Pension accessible by all PAYE workers. We do fund our pensions and we will have to live a long life to recoup what we paid in given that most of us (me included) will not accrue 40 years of service to qualify for a full pension of half-salary on retirement. The pensions are good if you get to 40 years but that is not the norm, particularly for women affected by the Marriage Bar up to 1973.
We are all working with recruitment freezes and cost containment measures and we only want to share the pain fairly across the higher paid in the workforce, public and private. Reading the exemptions on the Finance Bill makes me mad to see how many semi-state bodies are included.