Mary washs her hands of Pharmacists and medical card holders

For the past week many medical card holders in the state have had significant difficulties collecting prescription medicines because of a dispute between the Department of Health and the pharmacists association (IPU). Effectively the minister has unilaterally cut payments to those chemists who administer drugs to medical card holders. Nobody likes when a unilateral cut in income has been imposed by a minister, as any public servant paying the pensions levy will quickly tell you. Minister Mary Harney has been her own worse enemy on many matters for some time and she has lost the confidence of the people because she has no mandate from the people.
However that does not necessarily mean that the chemists have the full support in the community. For a few weeks I’ve watched from the sideline while their medical card patients have had to endure great hardship to get medication. Essentially the patients have been used in a row about money to see who’ll blink first and come to the table. The facts are that the state has got poor value for money from administering, purchasing and dispensing drugs to medical card holders. It seems that for a long time the gravy train chugged along merrily. At one stage restrictive practises prevented competition between chemists and pharmacies had to be located a minimum distance from one another serving a verifiable need.
The market has changed hugely since towns have expanded and farming has reduced somewhat. The increase in competition from chains like Boots or McCaughley’s, increased rents on Main St and the establishment of a new school of pharmacy increasing the number of entrants to the market have led to extra outlets in the business. To set up a chemists shop needs compliance with the law in terms of premises location as well as the need to provide a qualified pharmacist on site. There are enormous costs but as long as the population climbs there’s something there for everyone. As part of the business mix, toiletries, drugs to medical card holders as well as non holders of cards and veterinary medicines will contribute to the chemists income. A pharmacist is a business person first and foremost. 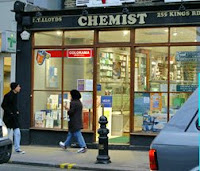 However it is not sustainable to continue funding the drugs scheme as it is. Other professionals providing services to the state have seen professional fees cut and in some cases payment deliberately retarded. Pharmacist revoked their contracts to provide medical card holders with drugs, as is their right, to protest against how the department had treated them. If teachers had gone on strike when the pension levy was brought in, we’d have been accused of holding the children’s future hostage (as we were once accused by a parent’ rep). Chemists say that their income will be cut by 34%. I accept that they have overheads, staff to pay and so on but any chemists who I’ve passed by in the last few weeks are doing very little business as most of their customers are down in Boots getting their medication. How sustainable is it to tell the bank that is itself crucifying business by refusing to release money that you’re paying staff the same amount to do less work on an ongoing basis? Chemists feel that they have the department by the throat and that to set up an alternative outlet dispensary the HSE must locate enough qualified chemists and suitable premises to comply with the law. A hard job for the department, but not impossible. During the 2001-02 teachers dispute the Department of Education found a way round our threats on substitution and supervision and I would argue that teaching has suffered since. Chemists should learn from the mistakes of others before they irreversibly damage their industry. Once changed it’ll never return to the way it was before.

My sympathies are entirely with the patients on this one. As long as the stand off continues the more likely it is that chemists will lose good customers and that rationalisation of the industry will see the consolidation of chains at the expense of family run pharmacies in Ireland. There are other issues such as the use of generic drugs in place of branded one and the relationship between the industry and the HSE but these won't get discussed during the dispute. It’s time for the pharmacists to re-open, take up their contracts again and offer to negotiate with the minister. Anything else causes hardship to those who need it least.
Posted by Unknown at 5:54 PM

I work for the Centre for enterprise at WIT. I've been involved in setting up a blog which celebrates the enterprising past of Waterford and the South East. We hope that by showing people entrepreneurs form the past more current innovators may be encouraged.

Its a strange, semi-coherent post. Two of the things you accuse pharmacists of are completely out of their control.

1. They are willing and have been willing to negotiate since these cuts were announced. They have been totally blanked and treated as an irrelevance by Mary Harney. She had no intention whatsoever of meeting, negotiating with them on this unless her hand was forced.

2. Pharmacies do not set the price of prescription drugs or negotiate with the pharmaceutical companies about using generics, the government does. Direct any queries on why they are so dear in Ireland in comparison to elsewhere to Mary Harney.

In addition the pharmacists, unlike Mary Harney, have not taken an absolute position, they know they have to accept a reduction in the dispensing fee. 35% is too much and will simply make many pharmacies instantly loss making.

Karlos, I've read and re-read the post and I haven't accused pharmacists of anything.
I clearly set the dispute in the context of changes in the market place and in the industry.

I suggested that it was medical card holders who were suffering. I'm glad to hear that the IPU has climbed down and that chemists will once again supply to those in medical cards.
I have made no comment on pricing of drugs,never suggested that pharmacists set prices at all, I've clearly pointed out "the state has got poor value for money from administering, purchasing and dispensing drugs to medical card holders." Some pharmacists like other business are paying too much in rent and could like other retail businesses go to the wall because of their costs.

In so far as semi-coherence I'd be happy to let others judge on that!