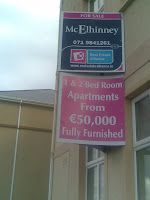 The above ad spotted on a property in Bundoran, Co Donegal will strike terror into those in the property trade particularly with an interest in selling apartments in seaside locations of which we have many particularly attractive ones in Co Wexford. The colapse in the market is flagged with ads like this for fully furnished apartments from €50K. So they’ve stuck a headline figure across an ad for 1 or 2 bed apartments and included the word from. Bundoran like Courtown or Rosslare is popular with tourists and if you bought now in Bundoran you would realise a return as well as having a holiday yourself in a resort with plenty for the family. Lets be honest they’re not all for that price in the apartment block but lets get back to the Grand Central Development at Bundoran in a minute!

I’ve felt that auctioneers in the south east have tried their best to ensure that vendors will achieve the best price and obviously ensure they get a commission but along the way the purchasers have been few because banks won’t lend and due to unemployment there’s less money to buy. To prop up their old friends in banking and building FF have proposed NAMA. This will buy up property at a discount (we’re told of about 25%) and then gamble that property will return to another bubble before offloading the property on hapless purchasers of negative equity in the next generation. In the meantime the builders bankers and movers and shakers will pocket money at the expense of hospitals and children needing SNA’s as the states bonds are cashed in at the ECB. But here's an example of property about 75% less now than about a year ago! So if NAMA goes ahead and we're going to fireproof specualtors against the real market we'll be subisdising the developer by 50 % of the original price which in the example above would be close to about €100K per apartment! NAMA is the con of the century and we're hardly a decade in!
There’s no silver bullet so effectively we’re nationalising private debt! So ads like the one that went up in Bundoran will be a wake up call. Some people obviously can’t wait for the NAMA lifeboat and are desperate. Any money is better than no money but is that not what the market is about? Stimulate the market and see if it exists. The bad news is shown in the next picture. A wider shot of the block 2 at the development at Grand Central shows an empty car park. It’s possibly early days yet for this imaginative pricing policy but it hasn’t been very successful as the entire car park for this development lay empty this week when I took the picture towards the end of what should be a busy tourist season. 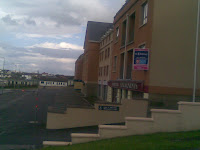 Which begs the question if there’s little interest at this price where exactly does the bottom of the market lie and when are prices in similar resorts in the south east going to get real? Let prices reach their true level. Thatcher was right when she said you' can't buck the market. In the greater scheme of things are public servants and those relying on services expected to carry the can for those who live in cloud cuckoo land in the property business? We’re rapidly moving on from zombie banks to zombie auctioneers, zombie solicitors and zombie builders courtesy of the false property market. If these professions believe in the market, let them have the market but fireproof those who don't work in a market.
As someone who aspires for their children to own property in the future all I can say is that I hope this situation can last for many’s a long day. Don’t ask me to subsidise those who gambled on a bubble and have already pocketed millions and are now stuck for something to do. Its time that the market got real and the rest of us got on with it.
Posted by Unknown at 11:28 PM

This NAMA is a disgrace. It should be stopped.