It’s a budget that Fr Jack would be proud of. If Carlsberg could do budgets they’d do this one! Drink prices hit the floor, the millionaire’s G&T drop in price as VAT & excise duty are reduced. The bill is picked up by the public servants and those on social welfare.
I debated the budget in South East Radio with Michael Wall (SIPTU), Michael O’Leary (a local financial services expert) & Cllr Michael Sheehan of Fianna Fail just hours after the speech. Dan Walsh did the needful and chaired the debate. Every year South East Radio has a budget debate and this is the second time I’ve done it. It’s an example of public service broadcasting that you don’t often hear in local radio. The response from the listeners was hugely critical of the budget, and I’m not surprised. As a budget, I must say that I’m still in shock. I’m shocked that Fianna Fail could walk all over vast swathes of people to appease the bankers, builders & IBEC so blatantly. If Labour tried a fraction of what FF & the greens pushed through there would be a schism.! 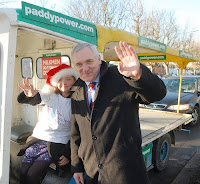 Lets punch through the noise and set Budget 10 in context. All the money saved last year has been channelled into the banks by the back door off balance sheet and not a cent of it was mentioned today. Its not as though we’re through the worse, the worse hasn’t started yet. There’s no stimulus here, SME’s are looking for credit, they won’t get it today and it won’t happen because the CEO of the Bank of Ireland gave away the game when he said that capitalisation will only lead improving the balance sheet of the banks, no mortgage holders or businesses need apply. Employment is the only way out of the slump.

We’ll soon be out of recession but we’ll be in depression then! By then anincreasing number of families relying on social welfare will be paying prescription charges per item, carbon taxes to heat their way out of fuel poverty, struggling to meet mortgages. against a backdrop of the ending of the embargo on repossessions.
How can you expect people who get less to spend more in an economy? The sub-text to the agenda is emigration, cut jobseekers assistance for young people and that will act to drive young people out. The other subtext from FF & the greens is that there is no alternative to cuts and that the rich should keep their heads down and let ordinary people carry the can.

On the way home I must confess I only stopped to fill the tank with petrol At home I saw Eamon Ryan on “Prime Time” tonight. I couldn’t help wonder if he regretted not running in the 2004 presidential election. Surely his chance of the park is now as real as Kenmare Hospital. The Green Party’s endless spin on the green or knowledge economy is running the risk of getting the word knowledge a bad name. The only green jobs created are for green senators counting frogs. That’s why the budget will get through. It won’t revive the economy it’ll knock it out. Once that happens emigration will start. In the end, Craggy Island may well seem more populous than John Bull’s other one
Posted by Unknown at 12:16 AM

DOWN WITH THIS SORT OF THING….. protested Fr. Teds banner in another show.
A more apt headline Joe ? Pull out that over used, dog-eared banner and dismiss whatever the nouveau-labour mindset thinks might harm it in the next election.
Nay, just condemn everything coming from a Green perspective.
Apart from naming the interview line up in the radio station your blog is bereft of
one single fact and your opinion misguided.
Joe, education was spared. Is this not important to you ? Does it not warrant a couple of words out of the hundreds you wrote ? As a teacher, parent or Councillor were you not thankful that the Greens put this issue at the top of their agenda for the new Program for Government? And delivered.
15000 Green jobs Joe. Dept. of Energy figures. http://www.greenparty.ie/en/news/latest_news/15_400_green_jobs_created_since_june_2007_more_to_come
All dedicated to a sustainable energy future, where we do not have to rely on pipe’s from Eastern Europe, ship’s from the Middle East nor giving support to the invasion
of oil rich countries to feed our €8 billion p.a. fossil fuel addiction.
Does the creation of thousands of jobs to insulate 45,000 Local Authority homes not make you happy or grant aid for an additional 45,000 in the private sector ?
The carbon levy will ease our carbon addiction and bring thousands of jobs back to the construction industry, warming our homes and securing our future energy needs.

Joe, our country is bankrupt. We have been standing on the edge of a precipice for a year now. Meanwhile this green budget has INCREASED the social welfare spend, protected education and reduced our weekly borrowing by €15 million per week. And you moan about frogs.
As a scientist/ biologist/ educator, you, more than most people understand the link between the health of amphibians, our environment and mankind. Frogs, Joe, are a key indicator to our future health and wellbeing. You know that. You are paid by the taxpayer to pass this piece of vital information on. You also know that spending €100,000 researching the reasons for their decline and consequently increase the health of the biosphere is money well spent.
You don’t seem to like good news Joe. Is it Labour policy to wallow in recession ?
A little foreplay maybe ? With a little intellectual orgasm when the possibility of a Depression hits the horizon. Is an extended recession the only hope for Labour ?
Your blog suggests it is. Labours history confirms it.
The schism you mention has happened Joe. Labour in government. 80’s. Remember that time you kowtowed to the absentee and domiciled bankers and builders. Your electorate left you in droves. The schism. They are back Joe, but just for a few months.
James Connolly is still spinning in his grave.
DOWN WITH THIS SORT OF SOCIALISM.

There's a lot of spin there. Lets deal with your criticism of me. I've never condemned anything from a green perspective. Ther is quite a lot of Green Policy that I can identify with. My difficulty wiht the party is that they've abandoned green policy and have effectively parrotted the neo liberal right wing spin of IBEC, FF, FG and the celebrity economists like Hobbs.
I recall opposing quite a number of unsistainabel developments in Wexford in the last 5 years and during that time when I was criticised from all angles for pointng out how unsustainable and damaging high rise was in Wexford, I never got any support for whatever reason from the Greens. I'm proud of my record on planning in Wexford, proud that I moved the motion to provide for an allotment in Wexford and proud that I ensured at the estimates in 2005 that significant increases be given to community and resident associations involved in environemntal and tidy towns work.

I'm pleased to hear that the Green Party has put Educaiton at the top of their agenda. Perhaps you may make contact with HQ and ask what is Paul Gogarty is doing about it!
The facts from the 2010 buidget is that spending on educaitonal disadvantage is down again. RAPID funding of disadvantaged areas is down. no increase in capitation fees despite the reality that full water charges are coming in at the end of the month. One school in Co Wexford despite implementing changes to water usage that have been nationally acclaimed expects a bill of over €35K! This will take more money away form where it should go. I raised these charges at the November Wexford VEC only to be laughed at by Greens & FF members.
If your proud of that then good luck to you!
Moreover 2,000 teaching jobs have gone, class size is up, special needs assistants are disappearing from primary schools. As yoou know school transport charges are set to rise while the green plan to re-employ 600 posts is over 3 years not immediate.

I remember the 1980's obviously better than you do! Frank Cluskey protected this country against the PMPA colapse. I was a member of the Dublin Labour Party then. It was long before Trevor won his council seat. Labour opposed FF & FG on various DCC draft development plans. Its quite sad that the Greens seek to re-write political history. You mentioned fact so check out endcamp, people like Mervyn Taylor, Joan Burton ( she still has the solicitors letters she got in the early 90's from people who now fund your government coleagues), Jane Dillon Byrne, Bernie Malone, Eithne Fitgerald & Frank Buckley. I could go on. Suffice it to say no Labour Councillor has ever been hauled before a planning tribunal. So find some other party to ahng the smear about builders (try FF?) What absentee bank was Labour kowtowing to in the 1980's?


You mention Jame Connnolly and infer that he would disapprove of Labour today. I don't thnk he have much time for your party.
Do you support John Gormley's atack on unions over pay cuts in the public sector. To be fair to oyu The Greens never portrayed themsleves as left wing. So stop pretending you've some uniques analysis from Engels or Gramsci!

Hello Joe
Sorry there Cllr, fraid I have to take issue with the comment about being laughed out of it at VEC on water charges issue.
35,000 euro for water charges is no laughing matter, and I have the greatest empathy for any school that would have to face such a burden.
What I did suggest was a couple of practical old fashioned ways of saving water that really work.
A brick in the cistern reduces the volume per flush, and this simple measure alone would doubtlessly reduce the cost.
We need to all change our attitude to water. It's a very valuable commodity, and we've got to accept that clean water costs. Yet, if we can adapt our behaviour by taking measures to reduce waste, this charge shouldn't be punitive.
And by all means, i am available for any fundraising/ awareness raising the school has planned for 2010.
I think we need to start from the basis that we all want the common good, rather than me right, you wrong.
All the best
cllr Niamh FirzGibbon

Niamh, as your coleague Paul Gogarty may preface his remarks, "with all due respect" it's silly to think that a second level school can fund raise each year to find €35K to pay water charges. I know a significantly smaller school that fund raised to achieve a taget for a third world visti by pupils and they spent a year raisng €20K.
As you know capitation fees were frozen in the budget while the 2009 budget that the Greens backed imposed on schools the requirement to meet more of the secretaries pay from the existing capitation fee. 2010 sees more pressure on the limited amounts BOM's get. I'm aware of 2 schools in Wexford Town that share a single water meter,The cost of installtion of watrer meters is prohibitively high, what revenue will be spent on improving supply?

If you're telling me that you didn't laugh at my point's I'm very happy to accept that and set the record straight but you will accept that when I gave a number of examples of the poor quality of water service in Co Wexford that some VEC members laughed,many of whom are government supporters.

My question to you is if the service is so poor what are schools actually paying for?