Irish Rail's scenic journey to closure; not there yet! 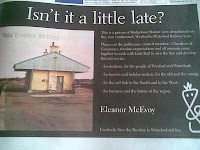 It’s days like today that give you a boost in a long campaign. First I got a call to say that Conor Cullen ahd doen a fine piece about the facebook page and asked a few hard questions of Irish Rail. Then I got the shock of my life at lunch time when I took a call from Eleanor McEvoy’s partner Mick to ask me had I seen the Wexford Echo. I’d spent all day in class so other than a 10 minute tea break I’d seen plenty of homework but no newspaper. When I did my jaw dropped! Eleanor is supportive of our campaign as she and Mick live near the line in the south of the county. I remember her album Yola which drew it inspiration from the locality from a few years back. What I didn’t recall was that the front cover picture was taken on the platform at Bridgetown station. I won’t forget it now as the picture is spread across a half page in all the Echo newspapers with the title “Isn't it a little? ” 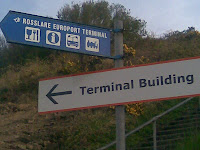 The ad is a novel way of promoting both the facebook campaign and Eleanor. It will I’m sure bring welcome attention to both in the media. The campaign is now at a crucial stage. Irish Rail thought by now that the line would be closed. The end of April was the date that union sources had advised workers they’d be finished. It seems now that when it comes to closing the line, the company is not quite there to quote their ad campaign but claim to be getting there! In fact they're not going at 90 MPH but at speeds more sedate that most of their passengers are now used to! But of course that doesn't stop Irish Rail from playing head games with their workers as one was recently told that they wouldn’t be back after leave was taken. I’ve never met an organisation that has such a high handed attitude to their workers. It’s like something out of the middle ages where feudal barons treated their serfs like slaves. Before the Wellington Bridge meeting one Irish Rail official whose name I know approached company employees and warned them not to speak out against the company. One who did subsequently received a warning letter! The HSE wouldn’t try this with their employees if there was a meeting over Wexford Hospital.

What Irish Rail should ponder is why there aren’t too many feudal barons left nowadays and if they were smart they’d wake up to the 21st century and face a few facts like they never really understood their market here, they never promoted the service and they cannibalised the timetable here just like they did elsewhere. The last line they closed 20 years ago ran between Athlone and Mullingar. To close that first they closed a perfect station in Athlone and built a new station where the Mullingar line was awkward to access. Next they ran trains when nobody wanted them, reducing the service to one a day each way (Arrive Moate at 11.30 PM), who would in their right mind want to go to Moate at midnight? I kid you not! Eventually the line had service suspended even though it linked 2 key towns in the region. Now where does that remind you of? 25 years on their modus operandi is the same.

I don’t have much n common with Michael O’Leary but one thing he always maintained was that the Department of Transport was the downtown office of Aer Lingus. He may have a point as I think the rail section in transport is definitely the downtown office of Irish Rail! If it was left to Minister Dempsey, I think the track would already be rusting and tumbleweed blowing across Rosslare Europort. From here on every extra day that the train runs is a bonus in my book. Management have undermined it with an unviable service, the minister and shareholder backs them up in this act of vandalism and the county bleeds. The sooner Minister Dempsey is sent packing the better. At least Labour in power would make the trains run! Perhaps Eleanors “Isn’t it a little?” could be the campaign song for the Labour General Election campaign!
Posted by Unknown at 9:49 PM