Yawn! Blah! Blah! Gilmore has a past! 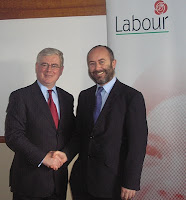 The drowning man clutches at any straw is a sean fhocla frm Eamon Gilmore’s part of Ireland. It seems that Fianna Fail having blown the economy have only got energy left to blow through a straw! The latest shock to the chatering classes is the Marian Finucane interview with Eamon Gilmore, a interview that I listened to in part and one where he preformed very well and came across as being competent and trutworthy.
Gilmore subtly nailed one of the FF & Green criticisms of how Labour would save money by saying he’d freeze spending on Metro North. Just like the coconut shy once one target had been struck down the FF captains reshuffled the Harland & Wolf built deck chairs by pointing out their concerns about Eamon Gilmore’s “past”. To distract from the Bertie Ahern NOTW closet ad, the suggestion is that Eamon has a closet with his very own skeleton! Sure there’s a straw worth tugging at, isn’t it?

Eamon Gilmore, they whisper can’t remember where he was politically in the mid 70’s at UCG. God help poor old EU Commission President Jose Manuel Barosso! Jose was a Maoist in the mid-70’s and yet his cuff is now considered good enough to tug by FF & the Greens as they scramble to bail out their banker and developer friends from the better known university in Galway, the tent . Does this sort of patter not show how out of touch FF& the Greens are with what people think? Hands up how many people remember Official Sinn Fein and can remember any of their policies? Many OSF policies were relevant to that time, a time when FF had only 2, draining the Shannon and the restoration of gaelige and last winter we saw how little progress they'd made on the former policy. FF delight on being a policy free zone that's why this year they won't hold an Ard Fheis!

The world now is a different place from those days in the 1970's. The old certainties of mid 70’s Ireland where women were treated as second class citizens and the Catholic Church dictated social values. Local authority Housing had yet to see the benefit from Jimmy Tully’s drive to expand social housing while farmers were outside the tax net and the troubles in the north saw record number of fatalities.
My recollection of the period was that few people worried about the cold war and I remember from the 1983 abortion referendum that the anti campaign that I was involved in had people who would go on to be PD’s, Labour members, pro Garret Fitzgerald FG’ers, trade unionists and even the odd CPI member or 2!
Its not so much that anyone worries about whether Eamon Gilmore has a past but what the electorate want to know is, has Eamon got a future? An electorate worn out by the FF cynicism will reward any party that offers a realistic future however hard it may be to get there but they have no time for negative politics. That’s why a red scare won’t work against Eamon.
But it’s also why despite the media suggestion of last week that Enda Kenny would be by now history that Kenny is still very much here and will remain. I have this view that the next election campaign will be between Labour and Fine Gael. I compare Ireland to the DDR, it didn’t get there because of Official Sinn Fein but it got there because of free market liberal capitalism courtesy of FF & their henchmen.
What Ireland will soon have to make its mind up on is not about what happened here in the 1970’s but what will happen in the next decade. If you change mortgage providers mid stream there’s a cost. Likewise while the budgetary arithmetic is being fixed now for the next 4 years, There are 2 sets of competing values that will drive that, FG’s way or Labour’s way.
Trying to work up someone who has lost their job about what organisation Eamon Gilmore was in almost half a lifetime ago isn’t going to change anyone’s assessment that this government didn’t see the writing on the wall 2 years ago for their own free market values and draw the inevitable conclusions in terms of policy changes.

How soon will we wait for the next target? Ruairi Quinn, Gentle revolutionary? FF’s spin is made of straw. Gilmore for Taoiseach and Burton for Tanaiste!
Posted by Unknown at 12:06 AM