The real world of Soacha comes to Wexford 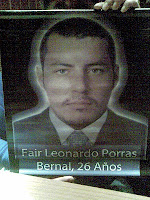 In the middle of the economic slump and a snow storm in town, a reality check. I met 2 women from Soacha Bogota in Colombia. The 2 women have had their sons “disappeared” in 2008. Later that year their sons remains were recovered from a mass grave along with the remains of 15 others.

There is nothing that you can compare this scandal to in Ireland. Colombia has a large and well resourced military who are at present engaged in a brutal war with the narco-terrorist group FARC. Colombia pays its soldiers by results, in other words the more you kill the more you earn. So as to maintain their incomes some officers decided to source people who could be shot and who would subsequently be claimed as terrorists when justifying executions and increased wages.
The men were picked up over a 2 year period in a poor suburb of Bogota called Soacha and transported hundreds of kilometres to a town called Ocana on the border with Venezuela.

The incentivisation of death devalues the cost of life. The victims were all taken from their home suburb of Soacha to a small town on the Venezuelan border where they were executed. For one 26 year old Fair whose mother is inconsolable as she tells me how he had contracted meningitis as a child and was mildly brain damaged as a result and had a mental age of a teenager. She showed me pictures and I really felt inadequate as I feel I can do very little to ease her sense of loss. But she didn’t come to Wexford to deal with her loss. She’s here looking for support for her campaign for justice. Jaime was just 1 when he was disappeared about the same time. 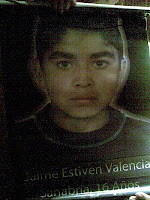 Another mother told me of her son Jaime. He was just 16 when he disappeared. The next day he telephoned from Ocana to his sister. She could hear commotion in the background and he was barely audible. He told her he wanted to come home. The next day he was executed an buried secretly. Subsequently his family were told he resisted officers and threatened their lives. The boy was just 16.

Its clear to me that these people are seen as poor and expendable. An investigation was ordered into the killings however charges collapsed. 3 generals were supposedly sacked, one ended his career as the Colombian Ambassador to the Dominican Republic. That doesn’t suggest any penury for his failings to me. In the meantime the relatives have received no compensation from the state for their loss, no admission of responsibility for what the state has done. To add insult to injury the relatives of those who campaign to highlight the Soacha case are threatened by military authorities.

I’m writing to Micheal Martin to ask him to bring pressure to bear on this matter and also to the Colombian ambassador. It’s something small, a gesture but it needs to be done. The irony of the mother of a young man called Fair looking for fairness from her government wasn'tlost on me. It really puts perspective on the current economic crisis.
Posted by Unknown at 9:13 AM