Tales from the Canvass 2011, Anyone seen an FF candidate yet? 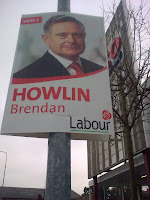 After a week of canvassing, it’s time to reflect on how the campaign is going in Wexford. Firstly our own Labour campaign for Brendan and Pat are making good progress. Ivan Yates who knows a thing or two about Wexford says he believes one of the Fianna Fail TD’s will lose a seat but won’t say which. Yates also gives the 4 other seats which as we all know is the kiss of death for any candidate so I won’t repeat it here. He figures that it is between our Pat and Dr Liam Twomey( FG) for the last seat. That’s some acceptance of how rapidly Pat has made progress in Wexford politics. Cork Vs Kilkenny for the last seat in Wexford! Did you ever think you’d see that?
Brendan Howlin is the outstanding candidate, there’s no doubt about that. Few of the other contenders get a fraction of the national airtime as Brendan as their party spokesperson. Few have as much credibility. The rest of the country will have a Gilmore Gale, in Wexford we're having a Howlin Gale!

Evening canvass is a nuisance in the dark. Finding your way round dark paths to front doors in older estates, reluctance of some people to answer in the dark are all factors that irritate the ordinary canvasser. Interestingly we canvassed a working class estate last Saturday night where everyone was in. I think most of these people would usually be out on a Saturday evening for a pint but not anymore. Less money to spend means evenings in. Look on the bright side, it hasn’t rained and many are openly indicating they will support Brendan and transfer to Pat Cody.
The number of young non-nationals coming to answer the door is significantly less than during the local elections of 2009. Many worked in the building industry. If they were single then they’ve likely moved on. They older ones with children in school are still here. They’ve integrated and their children are learning English and indeed Irish, their friends are Irish. Many are thinking twice about returning to their native lands.
The one issue that is coming back to me is from public servants who are worried about their future. As one myself I know the concerns but the baiting of the public service by FF, FG and the Greens is making for huge volatility among public servants. These people will vote and it may yet decide the final seat between Pat Cody the union official and public servant and Fine Gael’s Liam Twomey who regularly reminds us of the part he played on the FG financial team that met the IMF. This may be unwise on Dr Twomey’s part.
Meanwhile there are still no FF posters in Wexford town on day 3 of the campaign. I hear that the FF candidates aren’t exactly fighting over who gets this part of the constituency to be canvassed. No sign of any FF canvassers in town. Effectively there are just 3 candidates running campaigns on Wexford town, Howlin, Twomey & SF’s Anthony Kelly. The greens have yet to select a candidate. The word is that they’re getting close and may have someone in place within a fortnight, god bless them!
It seems bizarre that only these 3 candidates are campaigning in Wexford town. Nobody from the outgoing government parties will darken most doors. That’s an insult to the electorate. I remember 1987 when Labour was hammered on the doorstep only too well. But at least we went out, canvassed for our candidates, because the electorate has the right to engage, political parties are obliged to account. The only FF literature I’ve seen in Wexford was something from Mattie McGrath who is running in South Tipp. It seems someone dropped it inadvertently on a pavement!
With Micheál Martin on every radio station there is no starker contrast than the absence of FF on the ground. One FF TD last night on radio explained that the slow FF start is because they knew the wind was coming. Pity they didn’t see the slump coming!
The big question for the next 3 weeks is; will Fianna Fail and Green candidates ignore the people of Wexford who gave them the mandate 4 years ago and fail to account?
Posted by Unknown at 2:58 PM

I thought Brendan Howlin was part of the FF government, did he not have a soft job in it (Leas-Cheann Comhairle)?

Or just greedy and power hungry?

You lot didn't ring my doorbell either, just stuck some rubbish through the letter box,"sorry I missed you, Brendan". (I doubt he was).

There's a van with Connick plastered all over it parked on the quay outside Key West. That's the only sign of FF I've seen so far.

And the Greens only got 1.17% of first preferences last time out so why throw good money after bad (if they have any) by fielding a candidate this time with all the approbrium being heaped on them?

Hi Rory,
The election of Leas Ceann Comhairle is a function of the Dail & not a government job. Brendan was elected by a democratic decision of our democratically elected parliament to a post. LCC has no role in government whatsoever. What's wrong with that?
I'd check the bell if I was you, it could well be an embarasment itself! I canvassed High St on Thursday and knocked more than once when the bell got no response!

Hi Paul,
I saw the van myself on the Quays. Great to see FF get out to meet and greet. I heard john Gormley say that they would contest every constituency so I expect a candidate, although I can't see them poll more than a few hundred votes but hey Cyprian Brady has lived the dream for the last few years on less!