Anyone for the last of the semi-states? 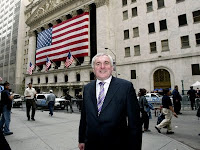 It reminds me of Croke Park when the hustle is on to sell the last few choc ices. Rather than be left with a soggy mess that was worth nothing the hucksters got more vocal, desperate to flog off the last ice cream.
It may be just April but already there is the hint of action in the air as a state of panic seems to be breaking about price of semi states and as to whether enough of them will be sold to keep the market analysts happy.

A few years ago Colm McCarthy produced his own hit list of public services that should be either ended or sold off so that the state finances would remain stable. If only the destruction of our state by the Greens and FF had ended at that by now we could at least be trying to reconstruct the country, but No.
Colm McCarthy is back this time recommending that €5B can be raised by flogging off the family silver; ESB, An Bord Gais as well as Bertie’s mates in Coilte are lined up while the big land bank belonging to CIE in Dublin Port will attract some speculators. How did we get here? Well lets look at some of the previous privatisations and see what was learnt.

The elephant in the room is the FF practice of packing state boards with directors with interests in property. They’re everywhere that there’s land. The former state owned shipping line Irish Ferries has a share value that exceeds a value you’d expect as the board members who again are property magnates bring their expertise to bear on the potential for asset stripping. Asset stripping is not just a FF core value. The former state owned sugar company’s CEO just happens to be the brother of the Agriculture Minister. Greencore closed its sugar producing arm at the height of the bubble and accepted compensation to morph into a property company. We now know the information used to arrive at the closure decision was wrong but will the company do a U turn and re-enter sugar production? Extremely unlikely.

So what will we do when one of the soon to be privatised companies takes a decision that is not in the countries interest but is most definitely in the interest of the company? As it is there’s at least one semi state board where already that happened anyway and little was done about it. I’m thinking of Irish Rail where Rosslare Harbour has been effectively mothballed by its owner. Rail services disconnected and ended, recently shipping lines seem to have indicated that they will end foot passenger services as the facilities in terms of onward connections have been axed by CIE. All this happened under the previous governments watch.

So whether a company is state owned or privatised seems to matter little to board members who rarely see themselves as having a culture of serving the public. As a result I would shed no tears if Rosslare Harbour was sold out of state ownership provided the new owner was interested in investing to compete with Dublin or Cork and restore rail and bus services. It would matter little to many in Wexford if the directors fees were paid out of the private purse rather than state coffers already depleted by the speculator class. In fact if a private company was committed to the port in the long haul there would be few politicians in Wexford who would shed tears for Irish Rail such is the poor level of service and investment.
Posted by Unknown at 9:33 PM

Interesting angle Joe but surely the thing to do is fix what they did wrong? I can't see a private co having the wherewithall to achieve the necessary development. Padraig Hall

The difficulty to me is that many of the present companies have long lost their sense of service to the nation. My experience last year with Irish Rail point to me their interest in serving themselves. Despite the 20 jobs lost there was no concerns raised by the unions. Dept of Transport seems to be of the view that if IE are happy then they're happy and that's not good enough for me.
Time for tough love in the relationship between some of the semi states and the people?