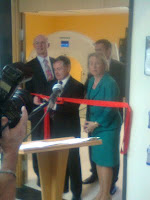 Nothing goes to the core of an Irish community more than the delivery of health care. Rarely is the health service out of the news. In the 80’s Fianna Fail shut many hospitals and the future of Wexford hung in the balance. That was until Brendan Howlin became a minister in 1992. In the new General Hospital facilities were greatly improved. However the advent of licensing for hospitals and changes in working time directives for doctors means that there is a growing pressure to change the hospital model for service delivery.
League tables of performance are the other side of waiting lists as the Irish love of medicine for profit and the consultant follows the money sees an inequity in access and outcomes in what is still one of the wealthiest countries in the world. So it was with a smile on my face that I left Wexford General Hospital last Friday. The occasion was the launch of the new CAT scanner which is one of only 4 in the country that will assess soft tissue in 64 different views! Not since the birth of my last child have I left the hospital in better form.
The reason? Brendan Howlin had once more done the impossible. He had saved the local hospital by announcing the injection of €20M into the hospital. The money will see extra beds for Accident and Emergency as well as a new maternity wing. This effectively secures the future of the hospital and allows the hospital do what it should be doing namely get on with providing first class health care to the people of Wexford.
As I pointed out to hospital management when staff are hit by salary cuts as well as lay offs the least that they should be entitled to is that hospital’s future is secured. It puts to bed the issue of the hospitals future and there are clear time lines. Tenders to be advertised and breaking ground by Autumn on a 30 month building project that will be opened in early 2014. Fair play to Brendan Howlin, he gave the commitment during the election to save the hospital and now he has delivered.
Posted by Unknown at 8:39 AM

I havn't read this post. But I read the colour supplement in this week's (trendy) People newspaper on Brendan Howlin.

I will be responding to that fascist rag later today.

But my temper is short, (I was jet-planed until I lost conciousness in Roche's Road last night).

Let me remind you and the rest of the Labour Party that many, many groups and individuals campaigned long and hard on that hospital issue and ONLY ONE WEXFORD TD HAD THE STONES TO BRING IT UP IN THE DAIL, ON PUBLIC RECORD AND THAT TD WAS MICK WALLACE.

Brendan Howlin has often brought up the issue of Wexford General hospital in the Dail. Check the record for yourself as far back as you want to go and has an outstanding record on the issue. I've attended public meetings about the issue here in Wexford and I've never met Mick Wallace at any of them.
Indeed within hours of Mick being elected he said he regarded himself as a national politician and had no interest in local issues like hospitals. I don't doubt for one minute Mick's sincerity but not even Mick Wallace is claiming he campaigned as you put it long and hard on that issue.

To quote from the above spectacular piece of brown-nosing (I'm surprised the Wexford People havn't offered you a job, since they usually kiss Howlin's ass longer and harder and more lovingly than anyone else (and I'm sure you could use a third one Joe)...

"Brendan Howlin had once more done the impossible. He had saved the local hospital by announcing the injection of €20M into the hospital."

The impossible that Minister Howlin does is run with the hare and hunt with the hounds. The hare being the rich blueshirts and the hounds being the gombeens from Fainna Fail. He diligently avoids us sad left wing looneys.

So I suppose its fair to assume that you're not too happy that the hospital extension is going ahead? What sort of politics is that? I know now why you get no political support.