Standing on the shoulder of a giant 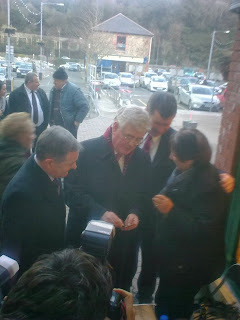 A long time since I’ve last blogged and a lot has happened, Wexford Labour has 3 new councillors but sadly we’ve lost our good colleague and friend Pat Cody over the Summer.  I first heard Pat on the local radio in early 2009 speaking about the need for a pedestrian crossing in Oylgate.  It brought a huge amount of pride around our breakfast table that Labour had a credible and articulate voice in Enniscorthy.  Pat subsequently was elected with ease to Enniscorthy Town Council and Wexford County Council.  Pat was an outstanding advocate on mental health for the county as he worked in St Senans Mental hospital in Enniscorthy.  He was also a committed trade unionist who cared enormously about how society affects ordinary people that do ordinary jobs in ordinary places.  You don’t see the likes of him on Prime Time but every town needs someone like Pat;  generous in his time while committed to his wife and daughter.  Pat subsequently ran in the 2011 General Election and got a very credible 3,300 first preferences on what was his last election.  I voted for him and transferred to Brendan Howlin so as to maximise the Labour
vote.

Pat was a Kilkenny man who was elected in 2009 to represent the part of Wexford that prides itself on being the heartbeat of Wexford hurling, Enniscorthy District. Each September without fail Pat would be gently ribbed in the council chamber as Kilkenny relentlessly clocked up Hurling All Ireland after All Ireland. Pat, a holder of an Under 21 Kilkenny football Champions medal, by all accounts took it in his stride. Liam McCarthy had returned Noreside, nothing anyone else could say would change that!
I sat beside Pat in Co Wexford VEC.  One day as we listened to the CEO read out grant allocations I noticed Pat texting under the table. What was he doing? He was getting details of the allocation to applicants as the announcement was being made! All of us in that small party which is the Labour Party will long remember Pat’s considerable contribution to politics over a short time span cruelly cut short by his relentless illness. I’ve no doubt that Pat would have held his seat in 2014. I believe his good friend Martin Storey who’s got his own collection of GAA medals will make his mark for Wexford too and that Martin will be re-elected instead of Pat.
Martin was selected to take Pats seat at the County council while Frank O’Connor will take the Labour seat on Enniscorthy council. Elsewhere Oliie Somers is the new Labour councillor in New Ross taking over from Bobby Dunphy/ Once more Labour is back to its 2009 strength in terms of personnel holding seats on local authorities.
But politics doesn’t stop for anyone. Selection conventions for Labour candidates are starting next week.  Its time to press the flesh both inside and outside the Labour Party. It’s time to fight for the values that Pat Cody was proud to say were his.
Posted by Unknown at 12:22 AM