Its only a month since I was certain Obama was set to be overtaken by McCain. However I hadn’t reckoned on President Bush’s incompetence and to be fair neither did McCain because otherwise he wouldn’t have picked such a 1990’s type candidate as Sarah Palin for VP. If a week is a long time in politics, then a minute is a epoch in the money markets.

I assume that the last week in trading in world stocks has eventually struck home. It’s not about rescuing the bankers now, it’s about rescuing McCain. Bush apparently wants to be seen to throw the kitchen sink at it. That’s why Bush is now buying shares in US financial institutions. Sure it smells of left wing interventionism but if Republicans don’t do it, Bush knows the Democrats eventually will, so he’d rather do it now and throw a lifeline to McCain, not of course that the world economies will wait until January.

Lets face facts, if you are male white working class in the US and your future seems guaranteed, as the species most likely to vote Republican, George W is declaring a preservation order on you at least until after polling day. Gone 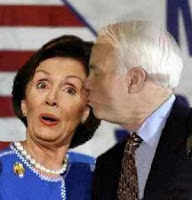 are the elections where presidential candidates were branded as “left wing” or (God forbid !) “Communist”. Bush’s authority in the eyes of the market has disappeared. The US economy is now on freefall.

FDR was in my view the greatest US President ever, he turned the US into a world power within 15 years of an industrial and agricultural crash off the back of his new deal. Obama may have similar potential if he’s elected and given that he’s comparatively young he may well be a hugely influential politician on the world stage for a long time to come. The big if is, can he be elected? Hilary's name may not be on the ballot paper in 4 weeks but like Banquo's ghost its hovering in the background because the economic crisis proves the Clinton maxim “It’s the economy, Stupid”. However, market forces do not obey political will even when it may be in the interest of those who control markets that they should. This is the dangerous territory that events in Wall St now find themselves in.

I believe that events now are beyond the ability of the federal government to contain and that should the uncertainty continue for another week then McCain is finished. Expect the campaign to get personal to distract US voters away from the blindingly obvious!