It can’t be conference time already again? There was a time when national conference was held only every 2 years but not anymore. This weekend sees Labour’s third party conference in 18 months, visiting the midlands for the first time ever. You’d think we’d maxed out on issues to discuss, but you’d be wrong and that’s a sign of a healthy thriving party. It’s become a cliché in Labour circles down through the years to say that this is the most important conference, but it’s my view that it is exactly that now, not so much for the party but for the wider body politic. Important because the issues we discuss are key to ordinary citizens in terms of their impact, not because there exist different views on solutions to these problems within the party. And that’s a huge and welcome difference from the time that I first went to Labour conferences in the 80’s.
What makes Labour’s Mullingar conference different to those of other parties is the extent of analysis of our societies problems and the ability of speakers to set out proposed solutions. We’re often criticised for having too many policies and sticking too long with our analysis but I’ve often believed that only in Labour do you get the honest, intense and passionate exchange of ideas and you can be in no doubt that Labour members and TD’s really hold out for what they believe in. In my time in the party we’ve seen Frank Cluskey principled stand over the nationalisation of Dublin Gas, Barry Desmond secured the liberalisation of contraception laws, Mervyn Taylor delivered divorce, Dick Spring contributed to peace in the north through the Downing St Agreement, gave his name to the Spring Principles and the subsequent IRA ceasefire. Niamh Breatnach for free 3rd level education and “Breaking The Cycle”. There’s plenty more now in the party where these came from!
It’s clear that there’s huge ability on Labour’s benches still. These TD’s provide the Dail with an opposition that is carved of the same backbone of those who stood up for values and vision in the 80’s. If there is an election this year and if Labour are in power as I believe we will be, I’ve no doubt that the class of 2009 will lead, challenge and change our society for the better, tomorrows reputations are being made today. 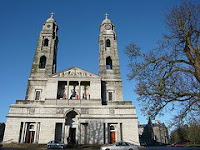 So here we are again at another crossroads and once more Labour is debating key issues in peoples lives; Lisbon, unemployment, the economy, the banks, education, health and social welfare. All of these issues and more will be fleshed out over the weekend. There will be debate, when you reflect on some motions you can see there is an argument on both sides.
I’ve always thought of the party being a national party of equal relevance in every corner in the country breaking beyond the Shannon. It’s a point that I made during the consultation a year ago on the 21st Century Commission and its ultimately one that party members must take on. We must make the party relevant in every village and street in the country. For that reason I confess to reading the agenda motions backwards! I see what a constituency or branch has submitted and then I read the motion to see what issue motivates that part of the country! It’s good for traditional strongholds of the party to listen to motions this weekend from the Rosses in Donegal, South Leitrim, Cavan, Sligo, West Limerick and Mayo. Listening at conference is as important as speaking. If such motions are a sign of a wider interest within Labour in parts of the country where the party wasn’t strong then I hope to meet new Labour councillors from Donegal to South Kerry after the local elections!

I’m going up on Friday afternoon for the opening as I wrote the Wexford addendum on primary education to include references to special needs education and that comes up on Friday evening. One motion that stands out for me that I’m pleased to support is Kilcummin, South Kerry highlighting the appalling decision by the government to withdraw funding for the cervical cancer vaccine for girls. I’ve no doubt that the motion will pass.
Now where’s my overnight bag and delegate card? I expect Eamon Gilmore will take a leaf out of the late Joe Dolan's book and send us home sweating on Saturday night!
Posted by Unknown at 11:15 PM


One of the reasons their same to
muted opposition to the prospect
of third level fees is because
there are perceived not going amount to much in costs of fees
and poorer students get a waiver
Even though sub prime student loans must be repaid reguardless of income, plus to have third level
completely dependant on tuition fees as means of “self Financing” has to be really very expensive.
At moment the highest the tuition fee the U.K. Is $6000. Its not a lot but however right now
university cheifs are demaning the right to set their own ranging from $10000, $20000 a year. At the moment the fees for the Royal College of Surgeons is $40000 a year. I know a taxi driver who has a Wife and 2 kids who is paying $6000 a year to study computers in maynooth university,hardly “rich”. What is more alarming is that Fianna Fáil is importing the
austrailian and New Zealand’s third models which is one the most expensive in the world
(only 15% of third level students are from working class back grounds in austraila)
Gerenally courses in austrailia range from $35000, $55000 a year


Another reason Fianna Fáil has such an easy ride over the tuition fees is the Perception than that Free fees only befit the rich, these figures prove other wise

The socio-economic intake into the universities
Children of agricultural workers accounted for only 0.3pc
children of unskilled workers
(2.5pc),
semi-skilled for 5.1pc;
skilled manual for 9.9pc;
and non-manual for 9.7pc


The socio-economic intake into the institutes of technology
children of unskilled workers
5.3pc),
semi-skilled (8pc)
and skilled manual (15.6pc)
and non- manual (11pc).

Note: The institutes of technology are opposed to fees and they never charged them

The rise in numbers

“But the really big gains in Dublin are in areas with high levels of social disadvantage, where, in some cases, the proportion of 17-19-year-olds at college has more than doubled since 1998.
In the Dublin 1 north inner city, participation has shot up from 8.9pc to 22.8pc, but the Ballyfermot area remains stubbornly low at 11.7pc.”


“The participation rate of students from the semi-skilled and unskilled groups rose from 23pc to 33pc-
40pc, while students from the skilled manual group rose from 32pc 50pc- 60pc. However, the semi-skilled and unskilled manual groups, as well as other non-manual groups, account for a smaller share of new entrants than their share of the population.
There is particular concern about the non-manual groups, such as gardai below the rank of sergeant, prison officers and clerical officers, whose participation rate declined from 29pc to 27pc since 1998”
“* A large increase in participation in Dublin 24 from 26pc to 40c and in Dublin 15 from 40pc to 55pc is probably linked to proximity to Tallaght and Blanchardstown institutes of technology.”


This economist Keynesianism advise to save the country