The final selection conference to pick local election candidates to represent Labour in the Enniscorthy district was held on Sunday last. Pat Cody a psychiatric nurse and SIPTU rep in St Senan’s and Francis O’Connor will fly our flag in June. There was a good turnout at the selection conference as Party Leader Eamon Gilmore was guest of honour. Councillors and candidates from all districts were there for the occasion and Eamon spoke about the significance of the election and how Labour’s fundamental analysis of the crisis differed. He said that Labour stood alone from other parties in not having councillors called to give evidence at tribunals. Labour he said wanted to see all contribute towards the crisis. He said that there had been great wealth created but that priorities into the future would not be those of the recent past. He pointed out that the quality of health care and education was more important than the label on your jeans. The people who got us into the mess did not have the credibility to get us out of the mess. To sum it all up what the economy needed was jobs, given that each person on the dole costs €20K in terms of social welfare paid and tax foregone, only jobs and the creation of employment would revive our economy, if as Brian Cowen says unemployment is to go up as far as 450K this year, that means we need €2B extra to support those in the dole. 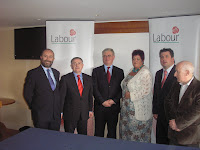 Nessa Childers was there too and spoke briefly referring to the party pledge as to what the Labour Party was about. Fair play to her for coming here as she then had to drive to Summerhill in Co. Meath for a function. Brendan Howlin chaired the selection conference and set out our target for re-establishing Labour in a former heartland.

Enniscorthy was one of the few councils in the country to record no change at the last local elections despite the huge swing in the country against Fianna Fail. This was more a mark of the local respect shown to the local Fianna Fail TD who was subsequently sacked by Brian Cowen rather than a ringing endorsement of the policies of Charlie McCreevy, Bertie Ahern and Mary Harney. The people of Enniscorthy owe Fianna Fail nothing as a result and I get the feeling that that’s exactly what FF will get this time around. As Francis O'Connor pointed out the town has been by-passed by everything except a by-pass! I believe Labour will return to the council in the town and that one little bit of the political map in Co Wexford is about to be coloured red again.
Posted by Unknown at 9:06 PM