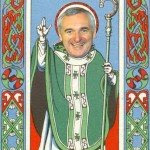 Another St Patrick’s Day, is almost upon us and it’s a chance to reflect. If a week is a long time in politics what does that make a year? A year ago Spy Wednesday saw the unfolding of Bertie Ahern. Who’d have thought that exactly one year on from Bertie Ahern’s humiliation by his former secretary Grainne Carruth that rehabilitation would be possible?

However it seems one is well underway just 15 months after a poll showed that Brian Cowen was significantly more popular than Ahern. The little matter of the Mahon Tribunal Report aside the subtle distancing by Ahern from his successor are well underway while an alternative career as a TV anchorman come international statesman and conference tourist blended with a new website have all compounded the smokescreen created by his IFTA award winning series.
The power may be gone but not the opportunity. 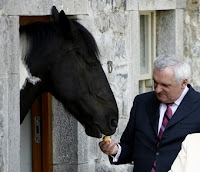 Indeed there’s plenty of scope to spin and re-cast the Bertie Myth; He’s peddled several notions in the recent past that clearly show him to be in denial; “The slump wouldn’t have happened if I was in power”, “The rivalry with Tony Gregory wasn’t personal” or “I won it on a horse”. The “ordinary” man who was the most devious of them all and returned the compliment describing his mentor Haughey as “a patriot to his fingertips” didn’t get the original accolade for nothing.

The down to earth socialist who counted plumbers plasterers and publicans as friends yet walked tall with Blair, Sarkozy and “the great President Bush”. When under pressure he hid behind a mask of inarticulate Dublinesse mumbo jumbo to deflect and play for time. A sort of Bang Bang meets Mandela. Extraordinary!
However Bertie’s relationship with Fianna Fail grassroots was quite different to that of Haughey. Haughey’s cumann members would travel the length and breadth of the country to support him during heaves.

Ahern on the other hand packed out the court yard of Dublin Castle with cynics who booed him. On more than one occasion while he gave evidence to Mahon I was minded of the emperor having no clothes. It was all for the media. For Ahern it was all about how he was perceived rather than the faithful. Haughey on the other hand knew how to work the party faithful famously saying he’d wouldn’t cut someone’s throat unless there was a percentage in it! Haughey never made it to the Arás but for Ahern the chance is still there in 2 years time. He knows if he can pull something out of the fire in Dublin Central that he’ll feel the people view him differently from Cowen’s FF.

The next 12 months are crucial to Ahern’s undeclared wish to secure another home paid for by someone else once more, this time it’s the tax payer who he hopes will foot the bill in the form of the Arás. So get ready to pay once more for his make up. At least in Cowen’s case that’s one expense the taxpayer has been spared.
However there may just be one fly in the ointment. Should the Mahon Tribunal make a decision that the taxpayer should pay Ahern’s tribunal costs, The overburdened middle class tax payer who seem to be hit for everything and are more likely to vote may take a dim view of Ahern and his antics. As Ahern used to say “A lot done more to do!”
Posted by Unknown at 8:09 PM