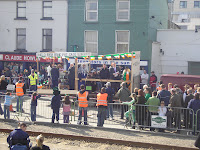 Wexford lived up to its image of the sunny south east as today’s parade was bathed in sunshine from start to finish. It was an impressive show of community involvement as the parade led as usual by the colour party of RDF and the Defence Forces Pipe Band took well over 75 minutes to pass the reviewing stand at Wexford’s Quays. On the reviewing stand was the Leas Ceann Comhairle Brendan Howlin, Mayor Ted Howlin, County Council Chairman Peter Byrne, Catholic Bishop of Ferns, Dr Brennan, Senator Lisa MacDonald, Sean Connick TD and a handful of hanger’s on from local politics like myself! 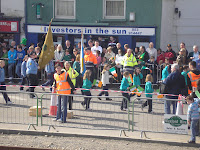 It was a wonderful parade with over 20,000 watching as the parade moved along the quays. The float that caught my eye was the Danescastle Group who usually cast a cynical eye on something topical. A number of years ago they had “Gardaí” chasing “Eco-warriors” while “ESB men with chainsaws” tried to cut down trees. This year was no different. 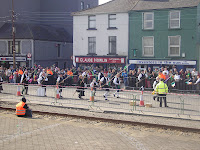 They had Anglo Irish Bank fat cats waving money set against a backdrop of a crowded dole office while a politician preached patriotic duty to the onlookers. I wonder who they had in mind? I really liked it so I waved a €5 note back at them! Following on their tail was a delivery bicycle with the door of a certain helicopter balanced precariously and an embarrassed Minister in tow. It was suggested that the Taoiseach should show the minister involved the door however, it seems he’s seen enough of it already! There’s nothing like the Irish to take our own do a peg or two! Indeed if you look closely at my picture you’ll find “Investors in the Sun” right behind the Anglo Irish Bank float. How appropriate! 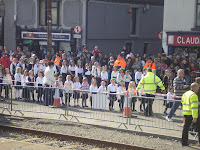 The rugby club had a pitch on the back of a trailer and the forwards were scrumming as they passed the stand, all looking forward to Cardiff next Saturday. The Gertrude Walsh School of Irish Dancing was up late last night performing at the St Patrick’s Eve Show in White’s Hotel and they were early risers again today as they danced their way along the quays. My own daughter is in there somewhere! The pikemen in their 18th century costumes also marched while the Tallaght Youth Band and An t-Inbhearr Mór from Arklow brought a little bit of razzmatazz to proceedings with their American style majorette display. There was Kung Fu, Clonard, Shelmaliers, St Mary’s Rosslare from GAA, Wexford Albion and North End from Soccer while the Gymnastic Club as usual put on their display. Scouts and Girl guides were also present.
Chun criochnadh bhí clan George Furlong ar an árdan inniu. Do bhí George ceannaire an Coiste Suiloid Namh Padraig í Loch Garman leis na blianta anuas ach cailleadh é annuraidh. Bhí a mhac ag freastal mar breitheamh don suiloíd agus ceapim go raibh post an deacair aige!
Posted by Unknown at 7:35 PM

I went to the Dungarvan parade but didn't get to the front of the barrier so didn't get good photos. It was a beaut day for parades, so unlike the usual freezing sleety rain I associate it with! There were some funny floats - one of a bunch of politicians and a cow - milking the public -probably PAYE workers - did you see Fintan O'Toole in today's Irish Times about the sitting ducks that are PAYE suckers? made me mad to see the way the tax advisors were highlighting the loopholes for the well-heeled non-PAYE sector. Worth checking it if you missed it. On the website I guess.
Back to the slog tomorrow and the INO voted for the ICTU action on 30th. Not sure what form it will take.